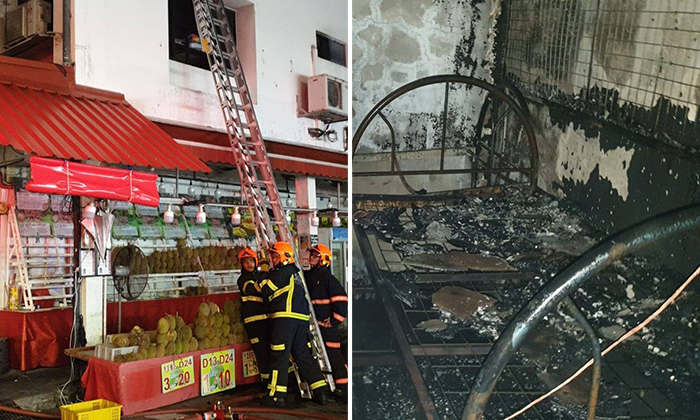 A man was rescued from a bedroom on the second floor of a shophouse at Sims Avenue after a fire broke out on Thursday evening (Nov 21).

"At about 7.20pm, SCDF responded to a fire at 85 Sims Ave. Upon SCDF's arrival, thick black smoke was emitting from both floors of a double storey shophouse unit.

"SCDF firefighters equipped with breathing apparatus sets proceeded into the unit, which was heavily smoke-logged and had narrow passages.

"Firefighters rescued a man from a bedroom on the second floor of the shophouse. Four other persons had self-evacuated prior to the arrival of SCDF.

"The fire, which involved contents of a bedroom on the ground floor, was extinguished with one water jet.

"Damping down operations are ongoing.

"The rescued man was conveyed to Tan Tock Seng Hospital for smoke inhalation.

In the same post, the SCDF explains that damping down refers to the application of water to wet burnt surfaces immediately after a fire is put out. This prevents any potential rekindling of fire from hot burnt surfaces.