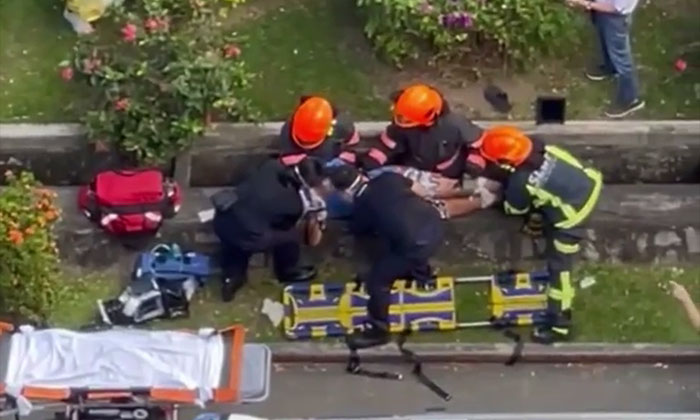 Covers have been installed over a drain at Block 22 Havelock Road, a day after a man in his late 50s fell in and got stuck for 30 minutes before he was rescued.

A video of the incident on Sunday afternoon, posted by Facebook group SG Road Vigilante, shows five paramedics carefully lifting the man out of the drain and preparing to transfer him to a nearby stretcher.

A small group of onlookers from the neighbouring Beo Crescent Market can be seen watching the rescue in the video.

The Straits Times understands the man was assessed by the paramedics to have sustained back injuries.

The Singapore Civil Defence Force said it received a call for assistance at about 4.50pm on Sunday, and the man was conscious when he was taken to the Singapore General Hospital.

When ST visited the site on Monday afternoon, workers from the Jalan Besar Town Council could be seen clearing the drain of fallen tree branches and leaves.

Drain covers had been installed, with residents saying the drain was not covered previously.

Recalling the incident, Ms Nu Nu Hlaing, 50, who lives in the area, said she was returning from grocery shopping at the nearby FairPrice outlet when she saw the man dashing through the bushes to cross the road before the traffic lights turned red.

He then fell into the drain, which runs between Block 22 and Havelock Road.

Ms Nu Nu Hlaing, a shop assistant, said: "I was behind him when he fell suddenly. People were shouting for help. I was glad that someone called for an ambulance, which arrived about 10 minutes later."

Checks by ST show that the drain, which is about 35cm wide and 70cm deep, can be difficult to climb out of once a person falls in.

Mr Xiao Wee Hin, 69, who works at a drink stall at the Bgain Eating House outlet in Havelock Road, said he was concerned after hearing about the incident.

"A lot of seniors who are less mobile live here. For older people, they should be careful of such drains and uneven roads," he said.