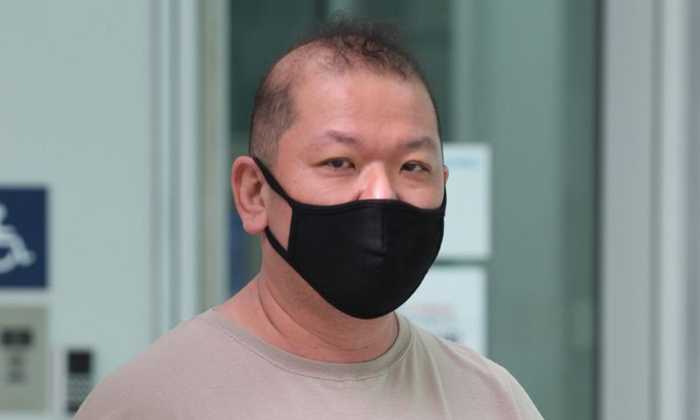 A supermarket crowd controller working during the circuit breaker partially removed her mask so that she could wipe perspiration off her face. This took about two seconds, but it was enough to set Tan Shiaw Wee off.

The man, 47, scolded Ms Ng Poh Wei, 52, and took a hand sanitiser bottle meant for public use and sprayed its contents at her several times.

And when he overheard Ms Ng telling a customer that she wanted to report the matter to the police, he removed his own mask and purposely coughed at her.

Tan pleaded guilty on Tuesday (July 28) to one count each of harassment and an offence under the Covid-19 (Temporary Measures) Act.

At the time of the offences, Ms Ng was working as a crowd controller and temperature taker at a Sheng Siong supermarket outlet at Block 451 Bukit Batok West Avenue 6.

She was at its entrance at around 8am on April 22 when Tan came forward and used a nearby automated teller machine to withdraw some cash.

At around the same time, Ms Ng removed her mask partially to wipe her face.

Deputy Public Prosecutor Norman Yew said: "The accused noticed this and scolded her for doing so.

Tan then walked away, the court heard.

While checking a customer's body temperature soon after, Ms Ng said that she would snap Tan's photograph and alert the police.

Tan walked towards Ms Ng when he overheard her.

He then removed his mask and purposely coughed at her once before leaving the scene.

The DPP added: "As a result, the victim felt the cough and became alarmed and scared that she might be infected with Covid-19 as a result of the accused coughing in her direction."

Court documents did not state how the authorities managed to track Tan down but he was later charged in court with his offences.

On Tuesday, DPP Yew said that Tan had not been diagnosed with Covid-19.

The DPP, however, noted that after being coughed on, Ms Ng's feeling of alarm must have been significant due to the current climate.

Tan will be sentenced on Aug 31.

He can be jailed for up to six months and fined up to $5,000 for harassment.

Related Stories
Woman sneezed in security guard's direction on purpose after failing to wear mask at Ion Orchard
$4,800 fine for man seen drunk in public during circuit breaker, dented boot of police car with his head
Woman who spat on KFC employee, cursed her and 'whole family to die' gets charged in court
More About:
Covid-19
court
inconsiderate
dispute