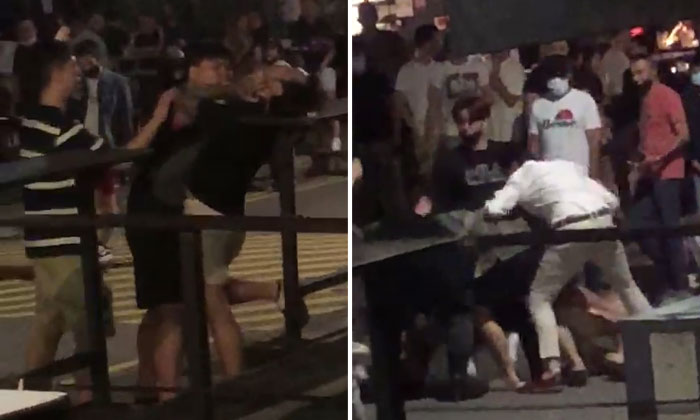 Police say they have arrested a 26-year-old man who reeked of alcohol and was causing annoyance to the public at 21 Lorong Mambong in Holland Village.

The police said in a statement they were alerted to the incident on Friday (June 19) at about 10.50pm.

In another statement on Sunday, police said that they have also arrested two Singaporean men, both 22, for their suspected involvement in a case of affray at the same location.

The trio are known to each other and had been dining in restaurants at the location, police said, adding that the 26-year-old man will also be investigated for affray.

The Straits Times understands the arrests were connected to a fight which was captured in a video clip circulated on social media.

The clip showed a group of people fighting along the stretch of eateries at Lorong Mambong on Friday evening. The commotion drew a crowd of onlookers.

The Urban Redevelopment Authority (URA) said that people were observed gathering around the outdoor refreshment areas and on the road in Lorong Mambong on Friday evening, the first day of phase two of Singapore's reopening.

One restaurant, British Indian Curry Hut, was ordered to close because it failed to ensure that safe management practices were adhered to, the URA said in a statement on Saturday afternoon.

"We have therefore ordered the restaurant to close with immediate effect. The restaurant will only be allowed to do takeaways next week and open for dining in from June 29, provided it has shown that it is able to implement safe management measures for its customers," said the URA.

It added that Lorong Mambong will be reopened to traffic to prevent people from gathering on the street, and the outdoor refreshment areas along the sidewalks will be removed.

The road is usually closed in the evenings.