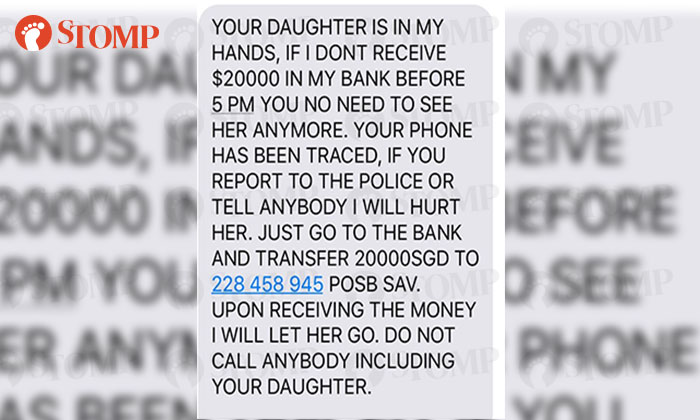 Stomper Harry received a dubious text message from an unfamiliar number on Friday (June 29), claiming that his daughter had been kidnapped.

Harry told Stomp in a phone interview that he had just landed in Singapore at about 8pm after a flight from Cebu, Philippines prior to receiving the message.

Said the father of two:

“I have two children, a nine-year-old son and a six-year-old daughter.

“I called them immediately after I landed. After I hung up, I received the message.

“I knew it was a scam immediately.”

The sender instructed Harry to transfer $20,000 to a POSB Savings Account before 5pm the following day, or he would not be able to see his daughter anymore.

Furthermore, the sender also said that Harry’s phone had been traced, and threatened to hurt his daughter should he go to the police.

He also warned Harry not to call anyone, including his daughter.

Knowing that it was a scam, Harry ignored the message.

He went down to the DBS Ang Mo Kio Branch located at Ang Mo Kio Hub on Saturday afternoon (June 30) to inquire about the bank account details which the sender had provided.

Harry said that he was told that the account was a valid and active account, but the DBS staff would not disclose if the account has since been suspended.

He subsequently lodged a police report at the Ang Mo Kio Police Division.

Stomp has contacted the police for more information on the incident.