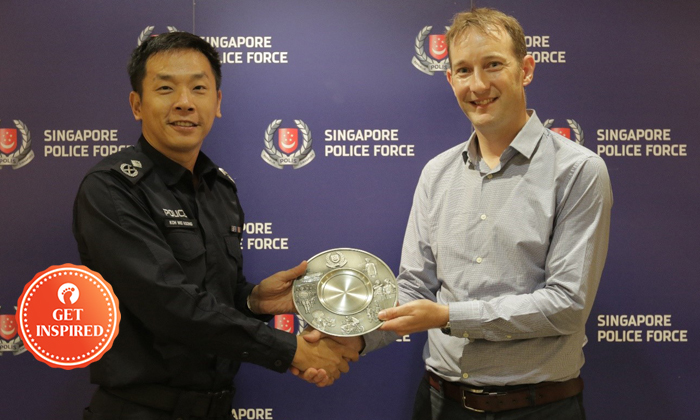 A man has been lauded by the Singapore Police Force for his part in helping to nab a suspect who was involved in a case of public nuisance and insulting the modesty of a woman.

The incident occurred at Newton MRT Station on June 19, at around 5.35pm.

Mr Keith Goldfinch was on an escalator when he heard a woman shouting for help to stop a man.

Together with another member of the public, Mr Goldfinch chased after the suspect and detained him at the MRT station.

Officers from the Public Transport Security Command conducted checks on the 53-year-old suspect and found upskirt videos in his phone.

"The man was subsequently arrested for public nuisance and he will also be investigated for insulting modesty of a woman," said the police in a statement.

Mr Goldfinch received a Public Spiritedness Award in a ceremony held at the Public Transport Security Command on Monday (June 25).

Commending Mr Goldfinch for his courage and civic-minded actions which resulted in the arrest, Assistant Commissioner of Police Koh Wei Keong, Commander of Public Transport Security Command, said: "In the crowded public transport system, every commuter can help to look out for one another and step in to help when a criminal act is spotted.

"Mr Keith Goldfinch played a critical role as he was vigilant to take notice of the victim’s needs and was willing to step forward to detain the suspect. His display of public-spiritedness is indeed commendable."