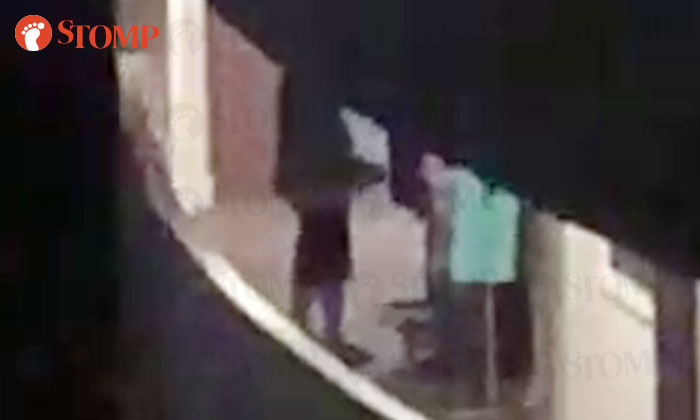 Stomper Grace and her husband Pal were standing on the balcony of their apartment when they saw a man behaving bizarrely at Block 105 Henderson Crescent on Monday (Apr 30) at around 12.30am.

They shared a video of the man with Stomp where he is seen taking clothes from a laundry rack outside one of the residents' units and rubbing it on the front of his body.

At one point of the video, the man is seen tugging down his shorts and rubbing one of the clothing items on his crotch.

Once he is done, he places the clothes back on the rack.

Disgusted at the man's behaviour, the couple, who live at a condominium facing the HDB block, alerted the police who were later seen at the block.

In response to Stomp's media queries, a police spokesman said that they were alerted to a case of public nuisance at Block 105 Henderson Crescent at 12.50am.

"A 46-year-old man is currently assisting with police investigations," the spokesman said.

According to Pal, this is not the first time they have seen the man acting this way.

"I once saw him doing the exact same thing last year," said Pal.

"At the time, I did not capture it but when we saw the man doing this again, my wife starting recording him."

Pal told Stomp he believes that the man was taking women's underwear from the laundry rack to rub on his body.

"Before we starting recording the video, he was actually roaming around the block and walking along different floors doing the same thing," he said.

"We just want to warn the other residents of that block about this man as his behaviour is concerning."