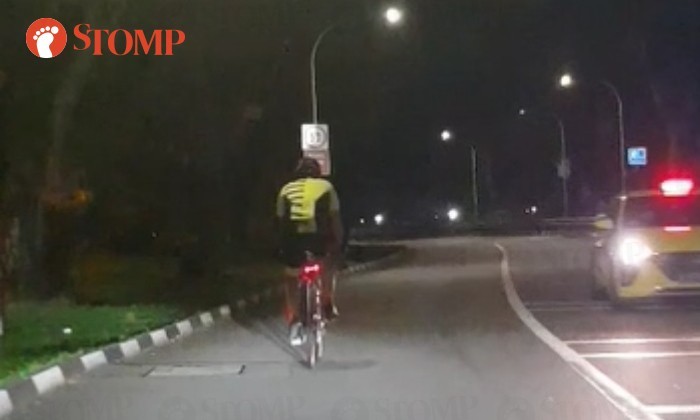 It is not an unusual sight to see cyclists on the road these days.

But when Stomper Kevin spotted a cyclist in the middle of the car lane as his friend was driving, he decided to whip out his phone to show his displeasure.

Kevin shared that the incident happened when he was in his friend's car along East Coast Park on Sunday (Nov 29) at 8.26pm.

In the video that Kevin sent, his friend can be heard asking him to "zoom la".

After zooming in, Kevin starts his entertaining commentary to show his annoyance at how the man was cycling "in the middle of the road".

"It's very selfish, I think something needs to be done," says Kevin in the video.

Kevin then proceeds to conclude his account of the incident by saying: "Okay that's all, bye bye."

The video, however, continues before abruptly cutting Kevin off mid-sentence.

Kevin told Stomp that he was unsure of the exact number of vehicles behind his friend's car, but estimated that the cyclist blocked "at least 20 motorists on the narrow stretch".

"This truly selfish behavior cannot be tolerated! Let's raise awareness of the correct behaviour for cyclists to follow, which is to keep to the left side of the lane," Kevin said.

"I felt frustrated because I know East Coast Park has dedicated bicycle lanes and yet, this cyclist chose to hog car lanes during the rush hour.

"I think his lack of awareness just puts himself in danger as well. So I think this video will be a good reminder to cyclists that this way of cycling is very unsafe."

This is not the first time cyclists have blocked vehicles by cycling in the middle of the road.