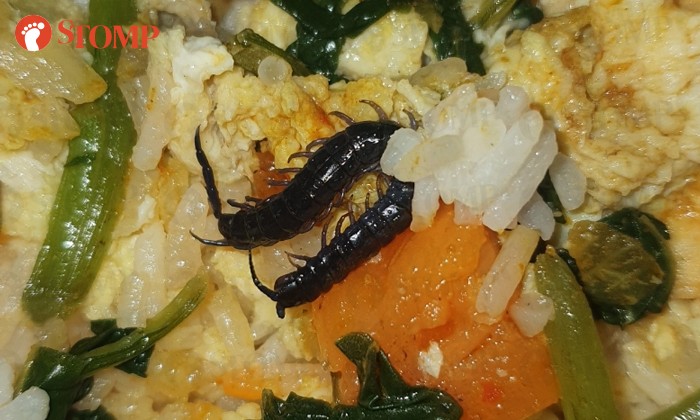 A man was left shocked and disgusted after finding a centipede in his lunch.

Stomper Yong said his wife had bought three packets of economy rice from a coffee shop stall at Block 444 Pasir Ris Drive 6 on April 21, at around 1pm.

The three packets were meant for Yong's wife and their two sons.

Yong said: "One of my sons, a 24-year-old student, was the last to eat. He had eaten a few spoonfuls when he saw a big centipede. He was shocked by the discovery and stopped eating.

"My wife and other son had already finished their meals. I'm not sure if they were looking at their food when eating but they didn't notice anything.

"My son took a photo and showed me. He then discarded his meal.

"It's the first time we have encountered something like this at the stall. I can't believe that the cook did not see such a big creepy-crawly.

"Personally, I feel distasteful of how the stall is always messy and fast-moving. The food is cheap but I try not to eat there unless I'm broke."