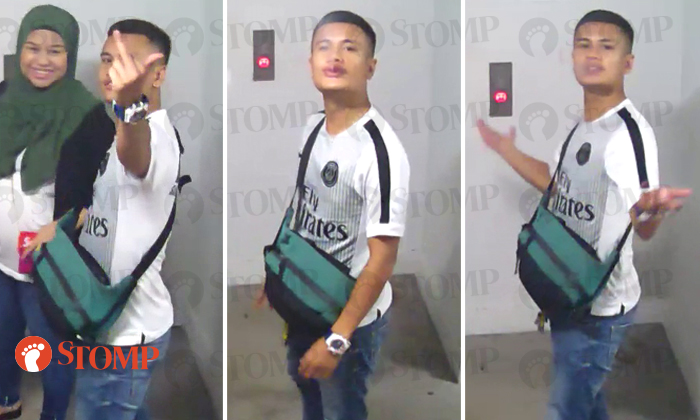 A man not only smoked in a prohibited area of an HDB block, but also showed how unrepentant he was of his actions through the display of various antics.

Stomper Andy shared a video of the incident, which his CCTV camera captured.

According to Andy, the man was caught on camera smoking "at about 8.39pm to 8.41pm" on March 26, outside his home on the third floor of Block 2, Jalan Kukoh in Bukit Merah.

Said the Stomper: "An irresponsible smoker was caught smoking at the HDB common corridor, adjacent to a lift lobby.

"Not only that, this guy still had the guts to act like a hooligan and showed his middle finger right in front of my CCTV camera.

"He also gave 'there is nothing you can do' gestures, which can be seen clearly in the video."

"For this matter, I am reporting the incident to the National Environment Agency (NEA) and the police for immediate action to be taken against such intolerable attitude.

"I hope that posting the CCTV footage on Stomp will let the person who committed this act realise that what he did was wrong," added Andy.

Under the Smoking (Prohibition in Certain Places) Act, lift lobbies, common corridors, stairwells and staircase landings are all non-smoking areas.

Related Stories
Yishun resident smokes along common corridor -- while looking at CCTV camera
Ah Boy and Ah Girl smoke under shelter "because it's raining" -- then KPKB when they get caught
Ah beng kena caught smoking but still got the cheek to film NEA officers as if he has done no wrong
More About:
smoking
HDB
rude
middle finger