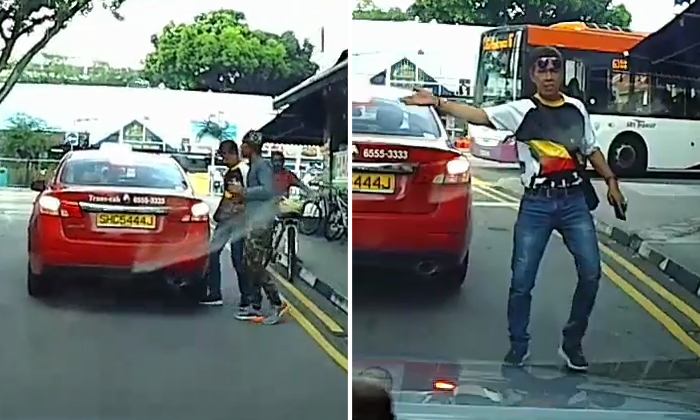 It might have seemed that a man got injured after getting his foot run over by a taxi — if not for a witness who caught the whole incident on camera.

The witness, who declined to be named, told Stomp that the incident occurred along Lorong 20 Geylang on Sunday (Mar 29), at around 5.18pm.

In a video that he shared on Facebook, two men can be seen stepping down the pavement and approaching a TransCab taxi.

One man appears to place his foot forward, such that it is under the taxi.

He then taps on the taxi and asks its driver to stop.

The man gestures at the taxi and at his foot, before sitting down on the pavement.

He starts gesturing at the witness when the latter intervenes.

The witness told Stomp: "As you can see in the video, there were actually two men.

"After I wound down my window and shouted at the first man that my car camera had recorded everything, his companion sneaked away.

"When the taxi driver saw that the man was talking to me, he quickly drove off.

"The man kept arguing with me and insisted that the taxi ran over his leg.

"I kept telling him 'jangan tipu' (don't bluff) and that my car camera had recorded everything.

"He challenged me to show it to him. I told him I would show it to him when the police arrive and we can watch together, and he walked away quickly."

Stomp understands that the witness made a police report on the same day.

Related Stories
Why did driver of SGN2489D abruptly stop on PIE, resulting in accident?
Woman runs across road and towards car, crouches down -- then suddenly changes her mind
Man behind 'Oscar-worthy' Farmway incident was an accountant, earned over S$10K monthly
More About:
accident scam
scam
taxi
facebook
viral