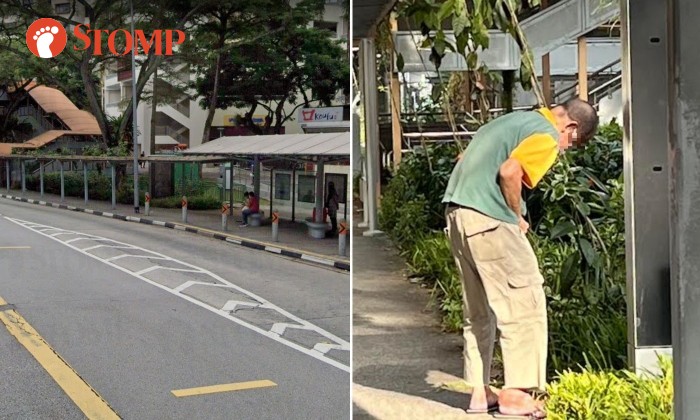 A man was seen peeing n the grass near a Commonwealth Avenue bus stop on Thursday (July 28) even though a public toilet was nearby.

Sharing a photo of the incident with Stomp, Stomper Susan said: "I saw an elderly man urinating onto the grass at the walkway in front of the bus stop at Sheng Siong Supermarket at Tanglin Halt.

"Why didn’t he go to the toilet at Koufu Foodcourt just a few metres away? Totally unacceptable behaviour!"

"It seems to be quite a few incidents of people urinating in public nowadays."

She is referring to recent Stomp reports of a woman peeing in public on Tuesday (July 26) and a man allegedly relieving himself in a stairwell of an HDB block on July 21. block. Both incidents happened in Yishun.

Related Stories
Woman squats down to pee outside Northpoint City
Man caught on camera allegedly peeing in Yishun stairwell: 'Why is he doing this?'
S'pore BMW driver draws flak online after caught peeing by roadside in Malaysia
More About:
peeing
disgusting
urine
Tanglin