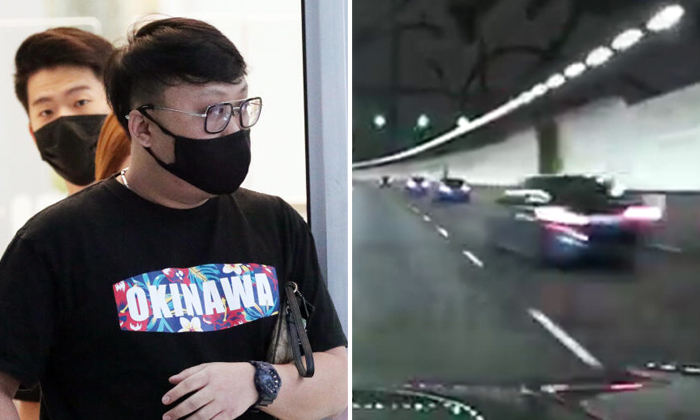 A man organised a "street cars meet-up" just before the circuit breaker last year, resulting in more than 150 cars showing up at East Coast Park, with the drivers and passengers mingling there.

Yeo Jing Cheng, 31, a car dealer, then arranged for the cars to drive in a convoy to Jalan Buroh in Boon Lay.

Some later had an illegal street race in Tuas, where more than 100 of the cars gathered.

On Thursday (April 15), Yeo pleaded guilty to one charge each of breaching a Covid-19 control order, dangerous driving, organising an event for more than 10 people and obstructing the course of justice.

Two other charges, of giving false information and taking part in the event he organised, will be taken into consideration for sentencing.

In March last year, Yeo wanted to organise the event to network for his car-dealing business.

He made a poster as an open invitation to the illegal event, which was to happen on March 28 last year, around 11pm at the carpark of the McDonald's in East Coast Park. He sent the poster to WhatsApp group chats.

Four days before the event, on March 24, the Government announced stricter Covid-19 measures, including the prohibition on gatherings of more than 10 people for non-essential purposes.

But Yeo did not cancel the event.

More than 150 cars showed up on the night of the event, with the drivers and passengers of these vehicles mingling for about an hour.

Yeo then shared information about how to drive to Jalan Buroh. And they drove in a convoy to a petrol kiosk in Boon Lay.

Yeo heard that there was another gathering at Tuas and joined a convoy that drove there.

They gathered in Tuas South Boulevard, where a few of the drivers held the illegal street race.

The Traffic Police received information about the illegal racing and about illegally modified cars and found more than 100 cars there at about 2.30am.

Upon seeing the police, everyone ran to their cars and tried to drive off.

But the roads were quickly blocked and those involved stopped for questioning.

To avoid liability, he told members of his chat group to exit and delete the invitation from the chat, Facebook and other social media platforms.

During the circuit breaker period, which was from April 7 to June 1 last year, Yeo was also involved in another car-related incident.

In the early hours of May 16, he was part of a convoy of cars that sped along an 11km stretch of the Marina Coastal Expressway (MCE) and Kallang-Paya Lebar Expressway (KPE), including the tunnel.

Yeo admitted to have been driving at around 100kmh.

The group was captured speeding by the camera of another car, and the footage uploaded to social media went viral.

Yeo saw the video and wanted to avoid being identified, so he removed his car spoiler.

When he was called in for questioning by the police two days after, he denied being involved, and claimed his spoiler had been "removed long ago".

He later came clean and admitted his involvement.

On Thursday, Deputy Public Prosecutor Stephanie Koh told the court Yeo had a list of antecedents going back to 2007, when he was caught for theft and driving illegally.

He also had previous run-ins with the law for obstruction of justice and substance abuse.

DPP Koh said the event he organised was frivolous and had a high potential for harm.

"(The event) had the capacity to spread Covid-19, although it did not," she said.

"The court should send a strong signal to the public to remain vigilant and adhere strictly to the prevailing regulations as the pandemic continues."

She added that the video of the convoy of cars speeding down the MCE and KPE tunnel during the circuit breaker period had also caused "public disquiet".

She urged the court to jail him for five weeks, fine him $5,000 and disqualify him from driving for two years.

He is expected to be back in court on May 25 for sentencing.

For organising the event which was attended by more than 10 people, he can be jailed for up to six months, or fined up to $10,000, or both.

For obstructing the course of justice, he can be jailed for up to seven years, or fined, or both.