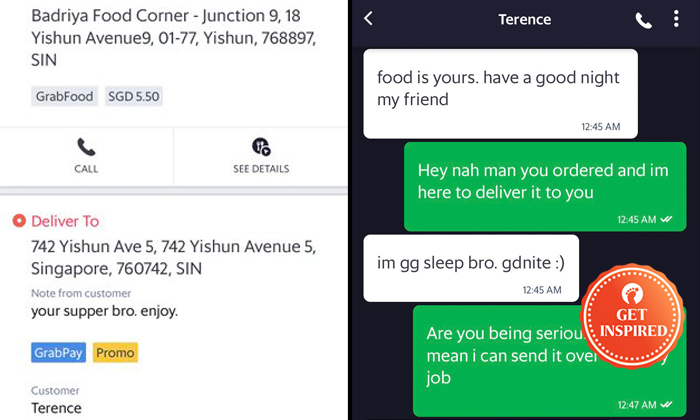 Food delivery staff often go unappreciated despite the long distances and hours that they brave in order to bring us our food on time.

Which is why what a GrabFood customer, Terence, did for his delivery rider will touch your heart.

Terence had ordered supper from Badriya Food Corner at Yishun's Junction Nine shopping mall after midnight on July 27 -- but gave the meal to his delivery rider, Fadli.

God bless you my friend:) pic.twitter.com/XTHcckyA84

When Fadli said he would deliver the order to Terence anyway as it was his job, the latter insisted that Fadli accept the treat.

Fadli, who tweeted about the heartwarming gesture, told Stomp that the meal consisted of fried rice and iced tea.

He said: "When I saw the special note that Terence had left, I didn’t believe it until I asked him. It didn't feel real at first.

"And then when he told me that he was being real about it, my heart felt so soft. I felt like I was going to cry and his act of kindness made me so happy."

Fadli, who has been in the job for around a week, also told Stomp: "I'm so thankful. Nothing like this has ever happened to me until that night."

Related Stories
Man orders GrabFood -- and is surprised by who delivered his food to the door
GrabShare driver receives thanks for helping Stomper who was in pain: 'I feared my fits would start'
Kind-hearted Grab driver rallies others to give disabled elderly security guard discounted rides
More About:
kind
inspiring
heartwarming
touching
GrabFood
grab
text
kudos