Man orders mala but gets a bag full of rubbish instead 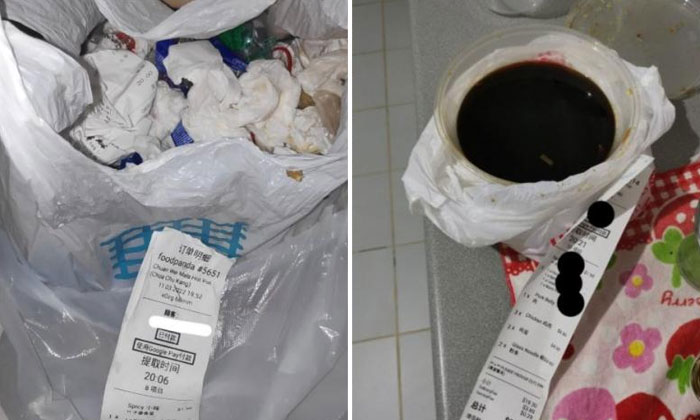 He wanted to eat mala, so he ordered from a hot pot outlet through a delivery service.

What he got was a “mysterious black soup”.

It was possible that the order just got mixed up with another.

The delivery service, foodpanda, gave him a refund and four days later, he decided to try again.

Again, he did not get what he ordered. But this time what he got was a lot worse - a bag of trash, including, he claimed, cockroaches.

Again he contacted foodpanda and he was again given a refund.

But Facebook user Zephyr Jun Xiang Ng had had enough. He put up photos of what he got on both occasions, and vowed never to patronise the eatery again.

He said it was unhygienic and disgusting - “bag of rubbish filled with used tissue paper, wrappers, other order slips and cockroaches”.

He told Mothership that the second order, placed a little before 8pm on Friday (March 11), arrived in just 26 minutes, too soon.

And the bag was clearly too light to contain his $19.48 order.

He said the delivery rider just handed him the tied up plastic bag and left immediately.

As in the case of the first refunded order, which was $23.48, foodpanda gave him a $2 voucher, and said it would investigate.

The stall, Chuan Wei Mala Hot Pot in Choa Chu Kang, later contacted him to apologise, but added that it was unlikely to be the chef’s fault.

It appeared that the stall had made a police report as well.