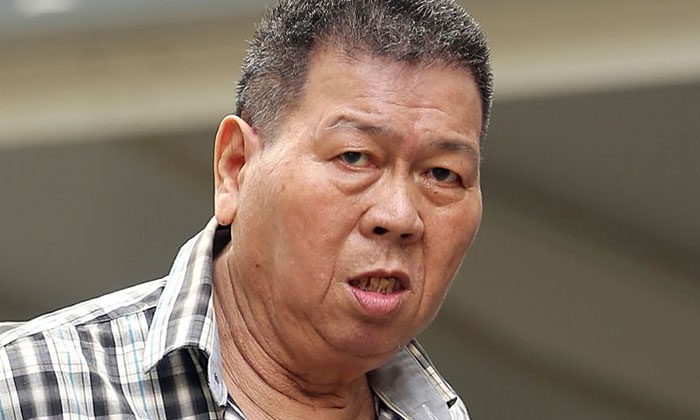 An elderly man was sentenced to 13 months’ jail on Monday (March 5) after he admitted to molesting a girl, 13, on an MRT train travelling from Aljunied to Paya Lebar station.

The court heard that Mak Yip Kee, 67, had stood behind the teenager and poked her private parts using his little finger during the incident which happened at about 6.30pm on Jan 7, 2016.

During the sentencing, a second similar charge for outraging the modesty of a 23-year-old business development executive was taken into consideration.

Deputy Public Prosecutor Winston Man told the court that the 13-year-old girl, dressed in her school’s physical education attire, had boarded a train at  Stevens MRT station on the day of the incident, reports The Straits Times.

After that, she alighted at Bugis MRT Station and switched over to the eastbound train, towards Pasir Ris.

Mak who was on the same train held onto a safety bar with his right hand and a mobile phone in his left.

The girl noted that his left pinky was pointed towards.

After the train departed from the station, Mak poked the girl’s left thigh.

The girl looked down and saw his left pinky was very close to her left thigh.

She thought that the man had accidentally touched her due to the movement of the train.

Thinking nothing of it, she moved to the left.

The man then poked at her private parts with his left pinky.

The girl looked down and saw that Mak’s pinky was very close to her.

Feeling shocked and afraid, the girl did not confront Mak and instead moved away.

As she moved, Mak kept looking at her to see where she was going.

Before alighting the train at Paya Lebar Station, Mak swung his right hand towards the second victim, a 23-year-old business development executive, prompting her to move backwards.

The student noticed that Mak had also touched the woman.

She later approached the woman and found out that Mak had also molested her.

Recounting her own experience, the girl broke down.

Together the two alighted at Bedok station and sought help from MRT staff.

The police were alerted to the incident, and Mak was arrested four days later.

He had a similar conviction 20 years ago.

For molesting the two, Mak could have been jailed up to two years and/or fined.

He escaped caning due to his advanced age.

Related Stories
26-year-old man arrested for molesting woman after attempting to befriend her at Ang Mo Kio
Alleged molester "roughed up" by woman's family after "touching her butt" at Bukit Batok
Male teen allegedly blindfolded, stripped and molested by NTU student under guise of research
More About:
Courts and Crime
molest
pervert