Man offering reward for return of pet macaw that was allegedly stolen in Hougang: Police investigating 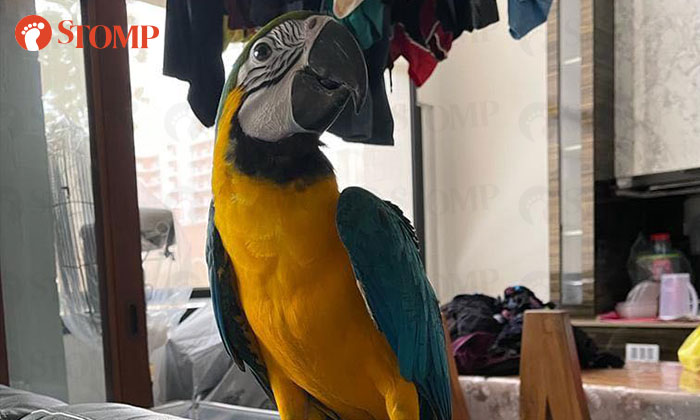 A Stomper is looking for his pet macaw that was allegedly taken by a man in Hougang.

Stomper Ismail said on Jan 9, his wife unchained his blue and gold macaw to let it fly around their home at Hougang Avenue 8.

However, the parrot flew out of their unit via the balcony.

They had owned the macaw for six months.

"We tried to look for him but to no avail," Ismail said.

He then took to Facebook in the hopes that someone else had found it.

On Jan 10 at 6pm, he received a call from a Facebook user who informed him that she was told by her father that his friend had captured Ismail's parrot in Hougang and sold it to a pet shop.

On Jan 11, he went down to Chua's Pets Trading at Serangoon North with a friend and was informed by the shop's owner that on Jan 10 at 1pm, a middle-aged man came to his shop to enquire the price of a macaw that he found in Hougang.

However, because he did not have the transfer certificate papers for the bird, the boss refused to do business with him.

The Stomper added that his pet bird has two metal name tags with his name and phone number on them. It also has a microchip.

He has since made police reports regarding the matter.

In the meantime, the family is offering a reward for the safe return of their pet.

"There has been a number of such cases involving the theft of pet birds recently," said Ismail.

"This is very concerning and we sincerely hope that there can be something done to prevent such incidences from occurring in the future such as imposing a harsh punishment for such a crime as a deterrence."

"We are very worried for our macaw and miss him dearly."

If you have any information about this, kindly contact Stomp at stomp@stomp.com.sg or WhatsApp 9384 3761.