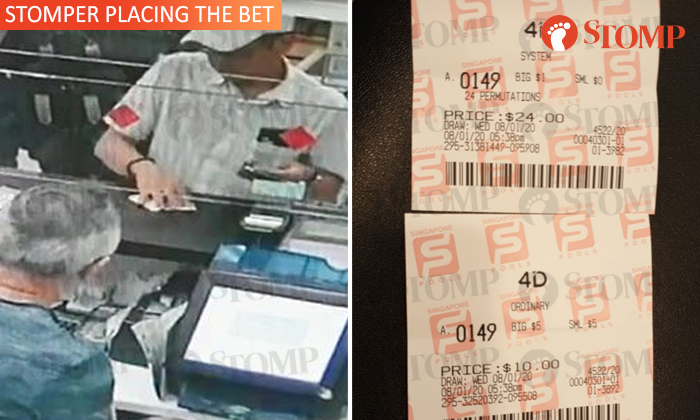 Stomper Vince was elated to learn that he had struck the first prize in Wednesday's (Jan 8) 4D draw -- only to realise that his winning betting slips had gone missing.

He shared with Stomp a screenshot from CCTV footage that showed him placing the bet in the shop.

Vince recounted: "I went to another Singapore Pools outlet that was within walking distance for horse-racing after that.

"At around 7pm, I heard someone exclaiming that 0149 had won the first prize.

"I took out my stack of betting slips from my wallet to check, and confirmed that I still had the two winning tickets.

"The staff there advised me to write my IC number and name on the back of the tickets in case I lost them, so I did.

"After the horse races, I checked my wallet again, only to realise that the two winning tickets were gone from my stack!" 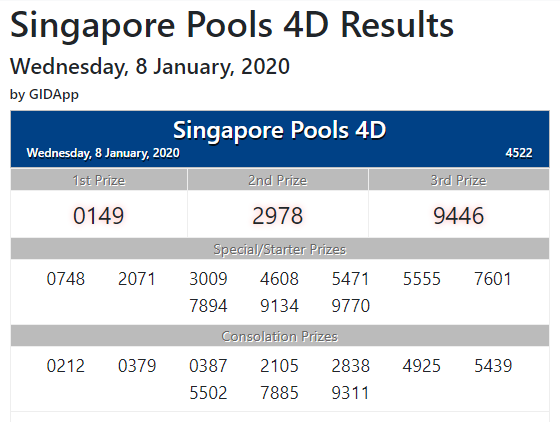 Vince said he is unsure of whether he had dropped the 4D betting slips and lost them, or if they had been taken by someone else.

He told Stomp: "I suspect the tickets could have been stolen while I was distracted because I remember someone brushing against me when I was in the betting queue.

"But I'm not sure if I dropped the tickets and they got swept away."

The Stomper subsequently made a police report and is offering a reward of $4,000 to anyone who can return his tickets.

He added: "It's already a police case, so whoever picked up the tickets cannot claim the prize money.

"I promise to give a $4,000 reward to whoever found my tickets and can return them to me as soon as possible."

Vince declined to publicise the exact locations of the two Singapore Pools outlets he had visited, but Stomp understands that they are located in the central region of Singapore.

In response to media queries, the police confirm a report was lodged and investigations are ongoing.

Related Stories
Honest elderly man finds owner of 4D ticket that won $5,000 -- but there's an even better twist
Single mother puts up note after losing purse containing $800 at Telok Blangah -- but later finds it torn up
Owner appealing to ladies who picked up her $40k watch outside OrangeTee Building to return it
More About:
lost
money