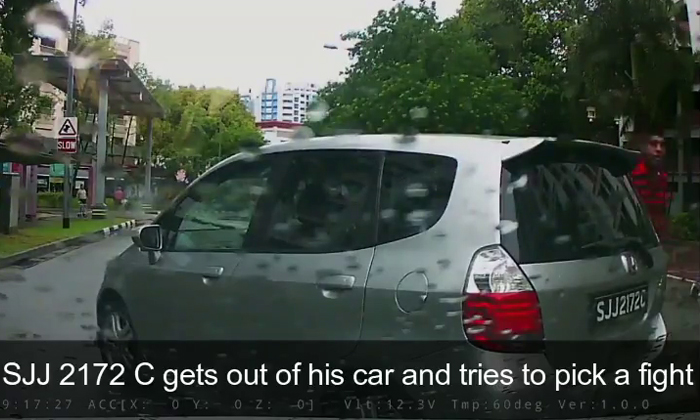 A motorist behaved recklessly on the road and nearly caused a collision with a Grab driver, then exited his vehicle to confront the latter.

A video of the incident was uploaded by Facebook group The Pirate Car Show, which is made up of a community of Grab and Uber drivers in Singapore.

Stomper Lindy, who is a member of the group, shared the video with Stomp and said it occurred in Sengkang.

According to her and a timestamp on the video, the incident took place yesterday (Nov 14) at around 9.15am.

Lindy also further described what happened: "The Grab driver was making his rounds around Sengkang when a car driver in front of him started hogging the first lane, undecided about where to go.

"After high-beaming him, the car driver abruptly slid to the right, causing a near collision with the Grab driver.

"To avoid further disruptions on his way to pick up his passenger, the Grab driver sped up and overtook the car driver.

"However, the car driver wasn’t too pleased and decided to go against traffic on a one-lane road, He then cut dangerously into the Grab driver’s lane and blocked his car.

"When he got out of his car and threatened to pick a fight with the Grab driver, he managed to fend off the threat by saying he would call the police.

"Road rage should not be the answer regardless of who is right or wrong."

Lindy also advised fellow drivers on how to act should road rage situations arise: "Please do not wind down your window, regardless of whether you are right or wrong, please call the police immediately!"