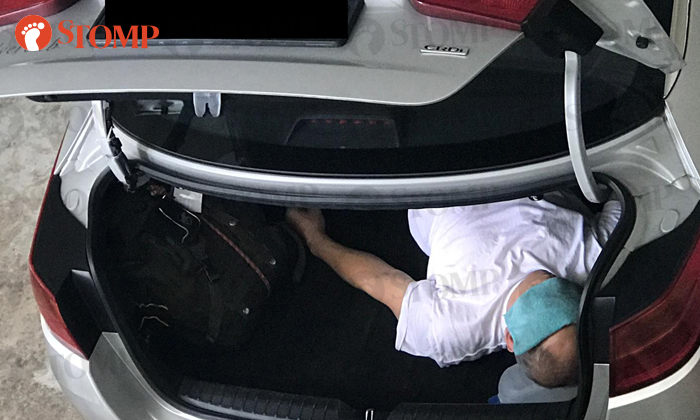 Stomper Anonymous was stunned when he saw a man sprawled out in a taxi at a multi-storey carpark in Telok Blangah on Thursday morning (March 14).

Anonymous, who spotted the man at Block 80 Telok Blangah Street 31 at around 10.35am, thought the cabby had fainted.

A photo taken by the Stomper shows the man lying in the taxi boot with his legs stretched out on the rear passenger seats.

His face was also covered with a handkerchief.

Anonymous, a resident in the area, said: "The back doors were all open.

"I almost called the police as I thought the driver had fainted.

"Upon a closer look, I realised that he was napping inside his taxi so I left him alone.

"It's tough being a taxi driver."

On Feb 24 this year, a private-hire vehicle (PHV) driver called the police and an ambulance after thinking a passenger had died in his car.

While the 27-year-old woman eventually woke up and made it home safely, the driver was said to be so troubled over the incident that he could not sleep the entire night.