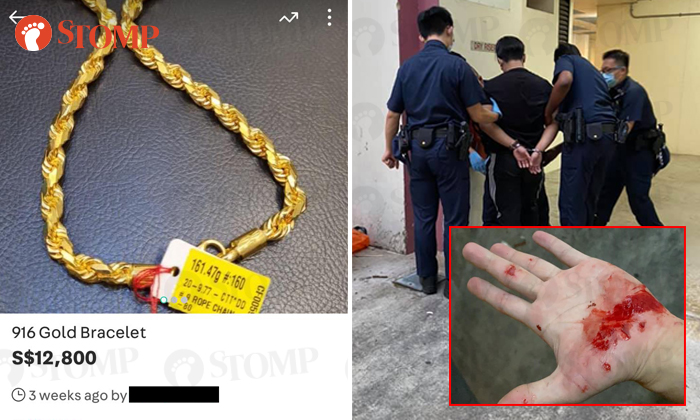 A man arranged to meet up with a Carousell user who was interested in purchasing his gold chain, but later realised that the buyer's intentions were less than pure.

Stomper Kenneth said the buyer, a youth, tried to rob him of the chain during their meetup at Block 695 Jurong West Central 1 in the early hours of Thursday (April 1).

The 29-year-old gave chase and managed to catch the culprit, but fell down and sustained injuries in the process.

Speaking to Stomp in a phone interview while at the hospital, Kenneth, who works as a debt collector, said he had listed his gold chain for sale on online marketplace Carousell for $12,800.

A user, who had no profile photo and zero reviews on his Carousell account, responded to the listing on Wednesday night (March 31). 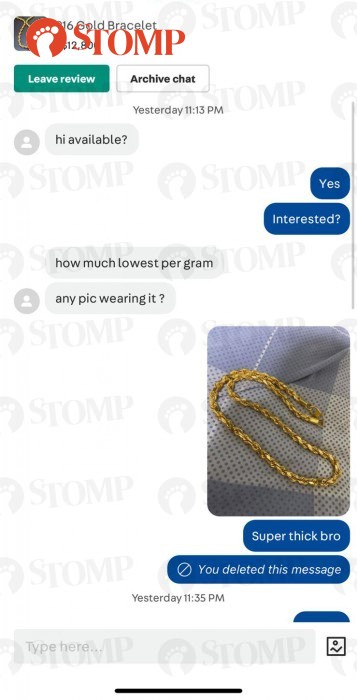 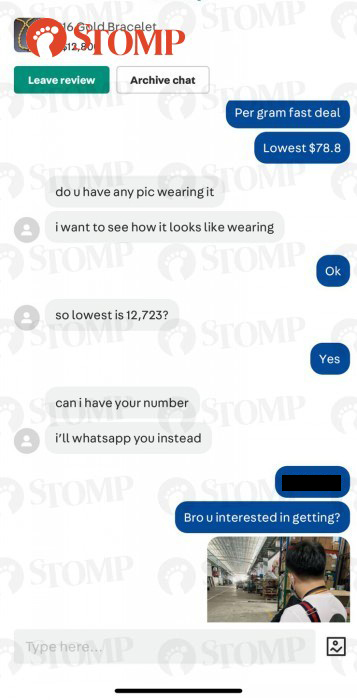 The two then arranged to meet at the foot of Block 695 Jurong West Central 1 at around 6am on Thursday.

Although it was unusually early for a meetup, Kenneth agreed to it as he lived nearby and the buyer seemed legitimate.

According to screenshots shared by Kenneth, the buyer had asked about the chain's authenticity and tried to negotiate the price.

The Stomper added: "He also said he had to work, preferred to deal 'not when the sky is dark' and would travel down to me, so I agreed."

Kenneth recounted: "When the buyer said he had reached, I went to meet him at the area between Block 694 and Block 695 and saw him sitting there.

"He asked to see the gold chain and stood quite close to me the whole time. He kept asking if the chain was authentic and where the markings were, so I showed him.

"I did not suspect anything at all."

Kenneth was shocked when the youth suddenly took his gold chain and fled.

He told Stomp: "The youth just ran across the street. I immediately chased after him, but fell down after 15 seconds.

"I was breathless as it had been some time since I worked out, but I told myself to just keep chasing or my gold chain will be gone.

"I didn't look out for traffic at all as I just wanted to get the chain back.

"While running, I shouted at a passing jogger to help me. I said, 'Brother, please! Please help me to catch that guy!'

"The jogger tried to help but was slower than me so I just continued my chase and didn't bother about anything else."

Kenneth eventually caught up with the youth at Block 679A Jurong West Central 1, when the latter was trying to run up the stairs to the multi-storey carpark.

He added: "I grabbed him by the neck and pinned him to the ground.

"I asked him for his handphone so that I could call the police."

Kenneth explained that using the youth's phone was also a form of assurance that he would not try to escape, as the police would be able to trace the call back to him.

He was also surprised to see that the phone was an iPhone 12.

"I'm not sure how he got the phone or whether his parents bought it for him, but I really don't know why he chose to rob me," Kenneth said.

"While waiting for the police, I asked him why he was so stupid as to do this.

"He told me that he had just left the Boys' Home and had no money. He said he was sorry

"He also said that he was living in Sengkang but came down to Jurong as nobody in Sengkang had wanted to meet up.

"I told him that he could just work if he had no money instead of doing something so stupid.

"I also said that I still had to call the police even though he was sorry because look at me, I had gotten injured while chasing him."

According to Kenneth, he had "fallen flat" on the ground and "landed hard" on his right side while chasing after the culprit.

Kenneth, who shared photos of his injuries, said: "There are abrasions on three toes of my left leg. I also tore the skin on both palms and hit my right elbow hard." 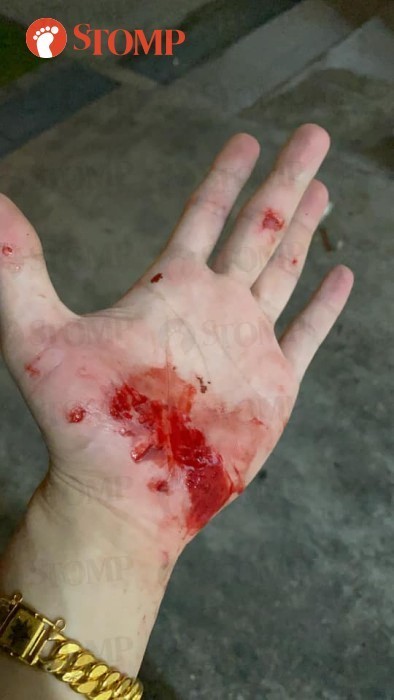 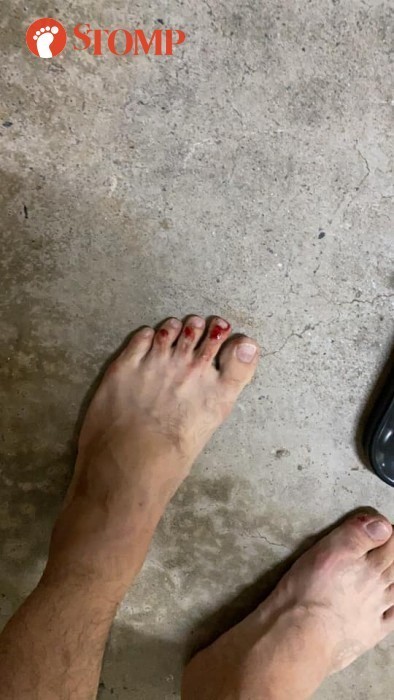 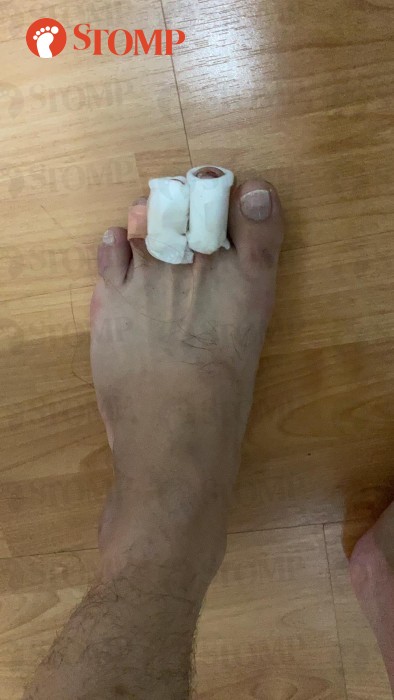 The police and an ambulance subsequently arrived.

Kenneth added: "I was treated for my injuries on the spot. The police took the gold chain for investigations.

In response to a Stomp query, the police said they received a call for assistance at Block 679A Jurong West Central 1 at 6.20am.

A 17-year-old male youth was arrested for criminal breach of trust.

Kenneth went to the hospital afterwards as he was experiencing pain and, while waiting, contacted Stomp to share his story. 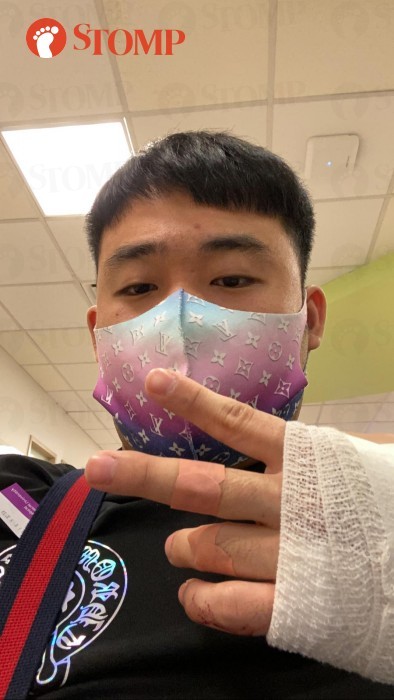 The Stomper added: "I was distracted by everything that happened earlier but now I think my kneecap might have issues.

"That guy chose the wrong victim. If it had been someone like an old lady, he might have really gotten away with the chain.

"I will be fine but I just want to warn the public to be aware. I have been using Carousell for six years and this is the first time something like this has happened to me."

Stomp has contacted Carousell for more info and will update the article shortly.

View more images of Kenneth's conversations with the youth and his injuries in the gallery.

Related Stories
Man arrested after snatching $30k in cash during business meeting at Syed Alwi Road
Man, 24, arrested for theft after fleeing with 2 Rolex watches worth $44k during meet-up
Carousell user tricked by scammer into giving up game account that he was selling for $100
More About:
robbery
Carousell
expensive
injured
police
arrest
snatch thief
snatch theft