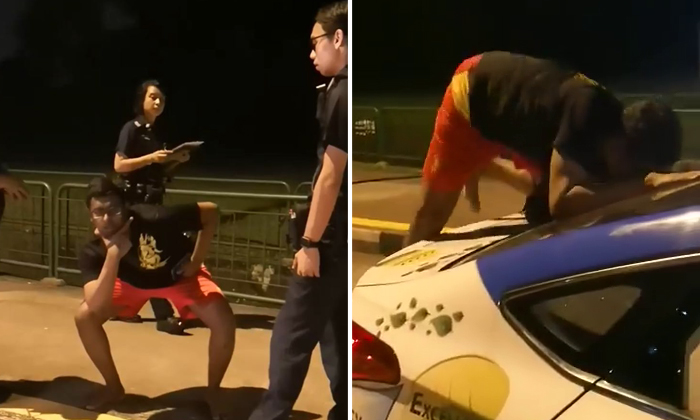 Police are looking into the case of voluntarily causing hurt.

Read the full update here: Police looking into incident of man who 'monkeyed' around and allegedly punched 62-year-old cabby

A man was caught on camera engaging in bizarre antics after boarding a taxi in the wee hours of Aug 31 at Ang Mo Kio Avenue 6.

Taxi driver Mr C K. Tiong posted Facebook videos of the incident, which he said occurred at around 3am when the man and a friend flagged down the taxi at Ang Mo Kio Street 61.

"As I was driving along Lane 1 at Ang Mo Kio Avenue 5, [the man] opened the rear door and wayang begin... wasted 45 minutes."

When contacted by Stomp, Mr Tiong elaborated on what occurred during the journey.

The 62-year-old, who has been in his job since 2012, told Stomp: "He spat on the back seat and the floorboard.

"Two or three minutes into the ride at Lane 1 of Ang Mo Kio Avenue 5, he opened the door.

"When I slowed down to drive left, he alighted and drunkenly walked to the middle of road.

"I could have just let him be and be on my way but this is still somebody's son and any passing vehicles might plough into him in the dimly-lit street here.

"I managed to pull him back into my cab but not more than three minutes later, he opened the rear door and alighted again.

"That's when I called 999 while keeping an eye out for approaching vehicles. Then the wayang started and when he assaulted me, I called 999 again."

Mr Tiong said that the man had also hurled "plenty of f words" at him and added: "He punched me from behind when I was talking to someone else and when I turned around, he spat in my face."

"However, I have never chosen or rejected passengers before and I will continue to pick up passengers who flag down my cab no matter where or when."

A police case card that Mr Tiong was given shows the incident being classified as a case of voluntarily causing hurt.

Related Stories
Female friends allegedly reject visiting hotel with man -- who then punches valet driver
Allegedly drunk passenger gets into dispute with ComfortDelgro driver after refusing to alight cab
Men hurl vulgarities, challenge cabby to call police after one of them walks into taxi's side mirror
More About:
cabby
taxi
assault
dispute