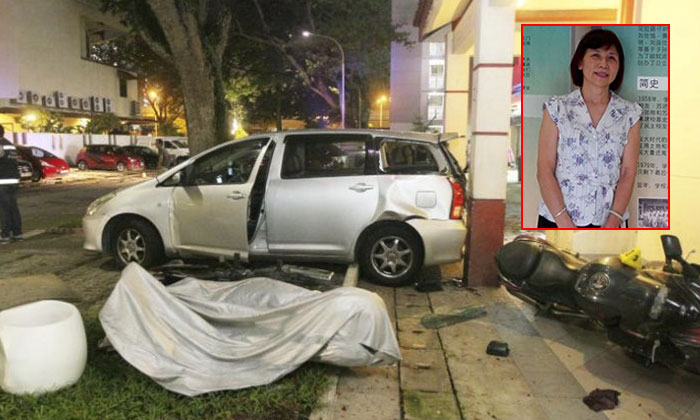 A man accidentally reversed his car into his wife in a fatal accident on April 25 last year, hitting her with the left passenger door which was opened, and then running her over.

In a Stomp report last year, a witness told Stomp that he had seen the injured woman stagger to the middle of the road before she collapsed.

Madam Ng Siew Fong, 64, was standing next to the car when it suddenly crashed into her. At the time, her 67-year-old husband, Quek Chin Leng, was at the wheel. She sustained a head injury and was pronounced dead on the same day.

During an inquiry into the death of Madam Ng, it was revealed that she had been run over by the front left tyre of the car after falling to the ground when she was struck by the passenger door, reports The Straits Times.

The court heard that Madam Ng, who served as a senior deputy director at the Ministry of Manpower's foreign manpower management division, had been driven the car to Ang Mo Kio for a meeting about a trip to China in May. Mr Quek was seated in the front passenger seat at the time.

The meeting was to be held at Block 332, Ang Mo Kio Avenue 1, but the pair could not find the block. They then asked another motorist, Mr Chin Chiap Shing for directions.

Mr Quek convinced Mr Chin to lead them to their destination, and took over the wheel from Madam Ng as he did not want to lose their guide along the way.

After reaching Block 332, Mr Quek alighted from his car to thank Mr Chin and even wanted to give him some money as a token of appreciation.

Mr Quek then returned to his car and that was when the accident occurred. Madam Ng was conveyed to Tan Tock Seng Hospital by an ambulance and was pronounced dead on the evening of the same day.

State Coroner Kamala Ponnampalam said in court on Wednesday (July 25) that Quek had become anxious after he heard his wife screaming.

In a state of panic, Quek who was intending to step on the brake pedal, accidentally stepped on the accelerator instead, causing the car to reverse quickly.

The car hit two parked motorcycles and only stopped after crashing into a pillar.

State Coroner Kamala added that there was no evidence of foul play, and ruled that Madam Ng’s death was “an unfortunate traffic misadventure”.

"It points to a failure by Mr Quek to keep a diligent look out before moving off from a stationary position.

"He had recklessly put the car in motion before determining that it was safe to do so and he appears to have stoutly ignored all the red flags - an open passenger door, his absent wife and possibly even the car's cabin light which may have come on due to the open passenger door.”

Related Stories
Woman dies after husband drives into her at AMK: New video shows what happened moments after the crash
Woman hit by e-scooter in Pasir Ris: Husband works 2 jobs, uses up $60k savings to make ends meet
Woman's feet run over by car while jaywalking with friend -- and it 'could have been worse'
Biker and pillion rider hit by car in Punggol shows why beating the red light never ends well
More About:
accident
death
courtroom
Ang Mo Kio