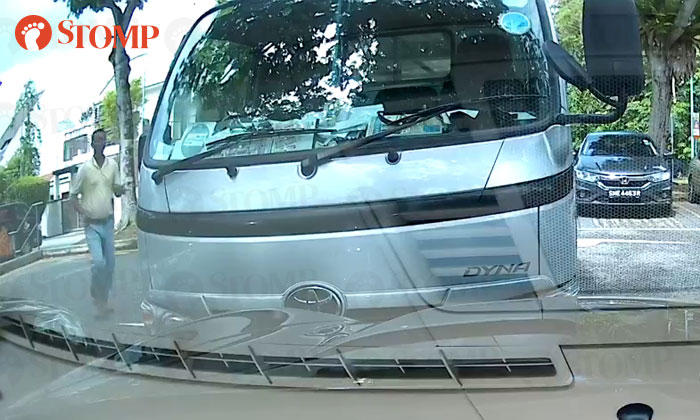 A driverless lorry was caught on video ramming into a parked car at Old Upper Thomson Road on Oct 4 at about 10.37am.

Stomper Astra, the owner of the car that was hit, shared with Stomp footage from his in-car camera.

In the video, the lorry is seen moving forward on its own and coming to a stop after hitting Astra's car.

The impact is big enough for it to bounce once after the initial impact.

It appears that the parking brake had not been applied.

A man is subsequently seen running towards the vehicle before getting in and reversing into the lot the lorry was in.

The lorry driver is seen inspecting Astra's vehicle but according to the Stomper, he did not leave behind any note or contact details.

Astra expressed concern for the pedestrians in the carpark who could have gotten hit by the runaway lorry.

He made a police report regarding the incident on the same day.

Related Stories
Newly-wed couple injured by hit-and-run car: "I will never ever ride a motorcycle again"
GrabFood PMD rider crashes into Foodpanda cyclist in 'hit-and-run' at Tampines junction
Mitsubishi driver knocks rider off his bike on CTE -- then drives away without stopping
More About:
accident
hit-and-run
lorry