Man makes offer for women's trainers on Facebook Marketplace: 'I want them dirty and just used' 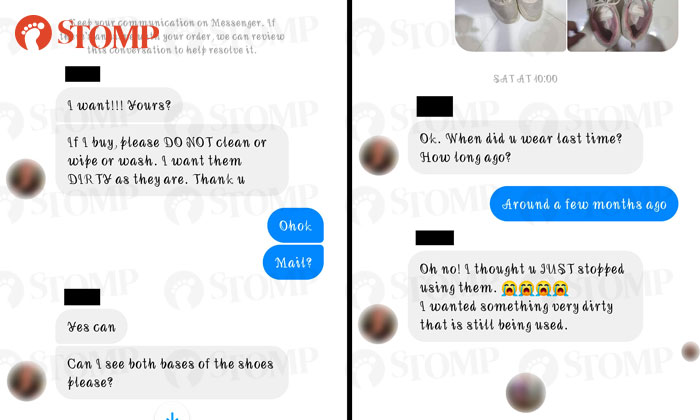 Most of the time, people are more than happy to sell off their used and unwanted items on online marketplaces.

However, Amy turned down a potential buyer due to his unusual request.

She had posted photos of her friend's used shoes on Facebook Marketplace in an effort to help her sell them.

"This guy on Facebook messaged me to enquire about the shoes," she said.

"I was like, maybe this guy really wants to buy so I entertained him.

"However, it went to the extent that he wanted the shoes 'just worn' and 'as dirty as possible'."

In screenshots shared with Stomp, the man said: "If I buy, please DO NOT clean or wipe or wash. I want them DIRTY as they are. Thank [you]."

When Amy told him the trainers were last worn a few months ago, he responded: "Oh no! I thought [you] [had] JUST stopped using them. I wanted something very dirty that is still being used."

Amy felt uneasy and exited the chat after recalling stories she had heard of people buying worn shoes and tracking down the seller's location.

When the man started another chat to ask her why she left, she confronted him on his unusual request and threatened to report him. 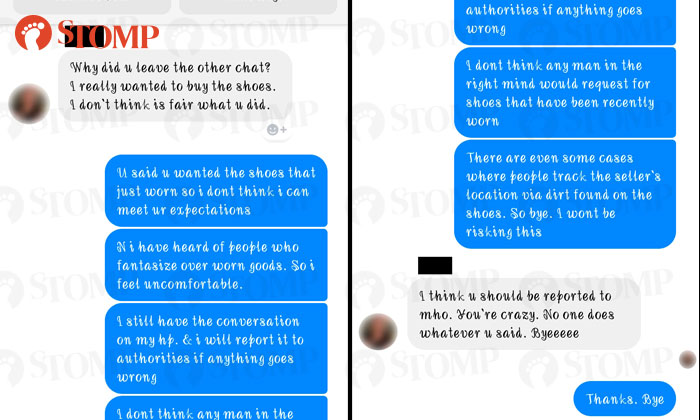 "He said that I was crazy and that I should be reported instead," she said.

"He then removed me from the new conversation after I had left the first conversation... OMG."