Man loses temper at Texas Chicken staff due to long waiting time: "Go away, don't come near me!" 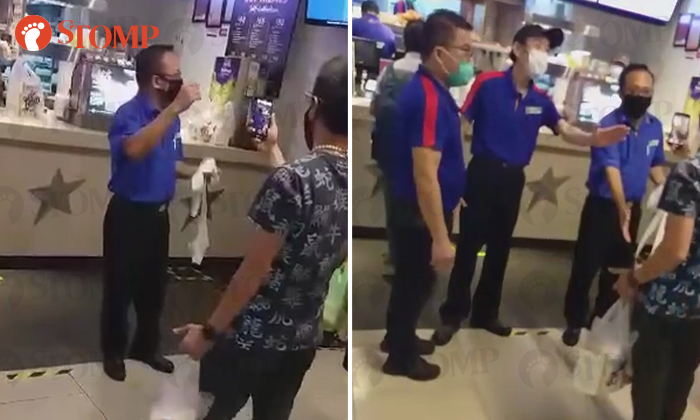 Upset that his order was taking too long, a man started shouting at staff of a fast food restaurant in The Seletar Mall.

He also used his mobile phone to record a video of the staff during the dispute — not knowing that his antics were being captured by Stomper Anonymous.

According to Anonymous, the incident happened at Texas Chicken restaurant last Friday (Apr 17), at around 7.30pm.

He identified the man as a food delivery rider based on what the man had been carrying.

Anonymous said: "I'm a food delivery rider myself and had been waiting patiently for over an hour when the incident occurred.

"The man scolded the staff non-stop when they were just doing their job and were already super stressed out from the incoming flood of orders.

"He is very impatient because he had only waited 20 minutes or so when he lost his temper. There were others who had waited two hours."

In a video that Anonymous shared with Stomp, the man can be heard shouting at an employee and repeatedly saying: "You go away, you don't come near me!"

Anonymous added: "The staff wanted to call the police as he was making a big ruckus.

"The police were not called but mall security came.

"In the end, the man just walked off while still making noise here and there."

Related Stories
Police called in to Hougang McDonald's outlet after customer shouts at staff about changing his order
Man shouts at Jalan Besar restaurant staff after being charged $0.60 for 'small bowl of rice'
Netizens praise Starbucks employee for how she handled angry customer at Yishun outlet
More About:
dispute
argument
restaurant