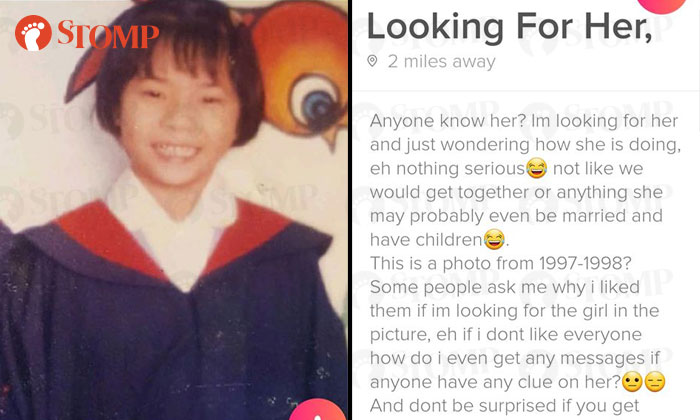 Users on dating apps have come across insurance agents and scammers, but Stomper Vel was amused when he saw someone using the online platform to look for a long-lost friend.

Vel said he came across the appeal on Tinder.

In the profile, the man uses a dated photo of a young girl in a graduation gown. He says the photo was taken sometime between 1997 and 1998.

He asks if anyone knows her and says he is "just wondering how she is doing".

He speculates that she may already be married with children. 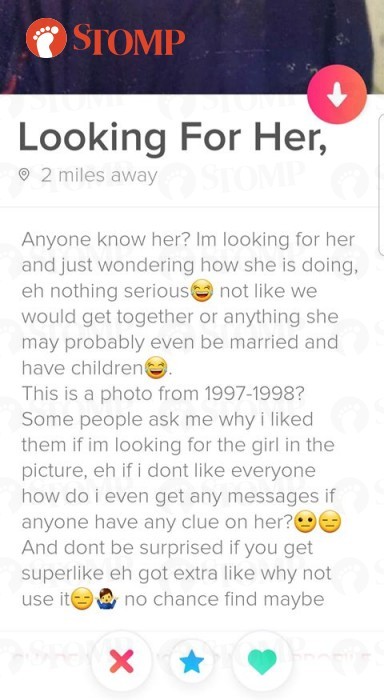 He explains that he swipes right on other profiles even though his intention is to look for his friend because that is how he can communicate with anyone who can identify her.

He writes: "And don't be surprised if you get superlike eh got extra like why not use it?"

Related Stories
Guy makes presentation slides on why he's a catch: Includes reviews from mother, ex-GF and... cat
Girl responds to Tinder match after almost 4 months -- after realising he won Olympic gold medal and beat Michael Phelps
Guy trolls girl he meets on Tinder after she starts asking about his friend
More About:
Tinder
looking for
dating app