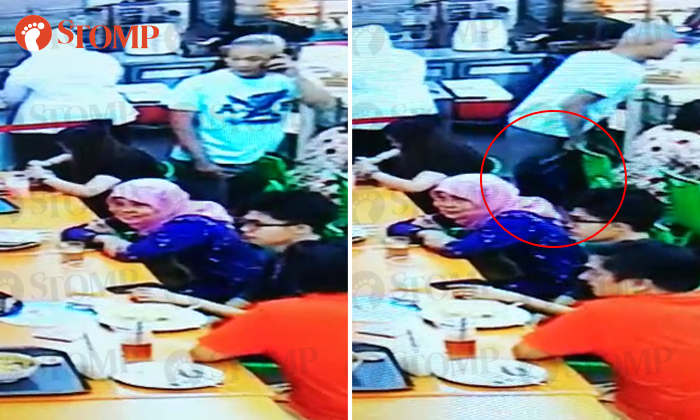 A 59-year-old man has been arrested in relation to the case.

A part-time student was having lunch at a coffee shop along Geylang Road on Saturday afternoon (Dec 22) when she had her bag stolen from her in seconds.

The victim's boyfriend, Stomper Anonymous, alerted Stomp to the incident that occurred at the Alwadi coffee shop.

The black handbag had been placed on a chair next to its 22-year-old owner while she had lunch with a friend at around 1.30pm.

Anonymous' girlfriend realised that her bag was missing around twenty minutes later, when she and her friend were about to leave the place.

CCTV footage from Alwadi's management showed how a man, who appeared to be talking on his mobile phone, had taken the bag from the chair and then walked off with it.

(The bag belongs to the woman in black)

A police report was made on the same afternoon at around 3.30pm.

According to the Stomper, his girlfriend's bag contained her wallet that had her IC, bank cards and $10 cash inside.

Anonymous told Stomp: "I'm not upset that my girlfriend lost her bag, but I want the culprit to suffer the consequences of what he did."

Related Stories
Woman tries on $69 shoes at Clementi store and walks off in them -- leaving own slippers behind
Man who took $99 bluetooth headset at AMK Hub, you have till Sunday before staff makes police report
Woman casually walks out of IMM store with bed set under her arm without paying
More About:
theft
stealing