Man left with spinal injury and $10k bills after hit-and-run at Pasir Ris: "I can't even work now" 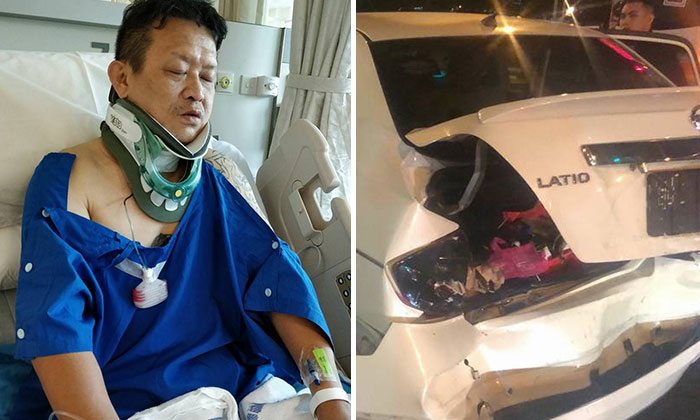 A man was left with a severe spinal injury after getting rammed by a BMW from the back while waiting for the lights to turn green at a traffic junction between Pasir Ris Drive 1 and 2.

The hit-and-run accident happened on Feb 1 at around 1.54am.

According to the victim, Mr Ke Qingjie, 51, the car that hit him was a BMW 5 Series bearing the license plate number, SCK101Z.

Mr Ke is currently hospitalised and has to wear a neck brace.

According to him, he had stopped his vehicle at a traffic junction and was waiting for the lights to turn green when he suddenly felt a huge impact coming from the back.

“I was stunned for a moment. I felt my ears ringing, and my hands which were gripping the steering were so painful that they turned numb. My neck was in terrible pain as well. I couldn’t move.”

Mr Ke said that after the incident, he was in a daze.

He remembered that someone opened his door, and told him that help would be arriving, asking him to ‘hang on’.

“After I was hospitalised, I couldn’t move for two to three days. I had to be on painkillers and anaesthesia so I could sleep.

“The doctor said my spine became misaligned, and over half the central nerves in my spine were damaged. I could have been paralysed if the nerves snapped during the accident.”

As the misalignment was quite serious, the doctor had to implant a metal plate in Mr Ke’s neck to rectify it.

The procedure was completed on Friday (Feb 2).

Mr Ke said that just the procedure alone cost him $6,000.

Coupled with the hospitalisation expenses, he could be looking at $10,000 or more.

Said Mr Ke who works as a deliveryman:

He revealed that the BMW driver did not stop to help after the accident and fled immediately.