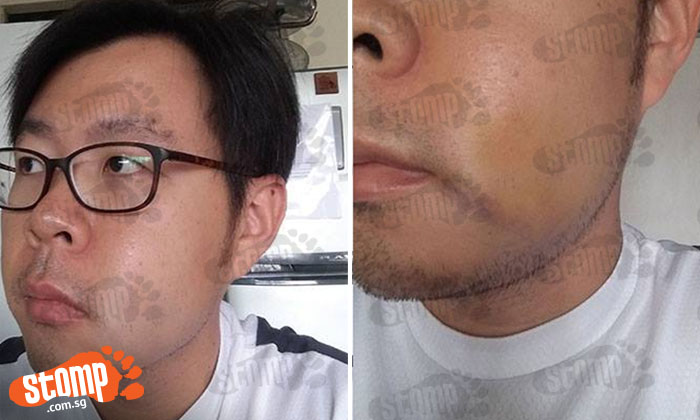 Stomper Ziyang alerted Stomp to an unpleasant incident where a teenage boy collided into him and knocked him unconscious at Hillview MRT Station on Dec 26.

"That evening, as I was about to head home and board the train, two teenage boys raced out of the train.

"One of them knocked into me, and the next thing I knew, I was on the ground, dazed and unconscious.

"I only remember that after that happened, I woke up on a chair in a room.

"I slowly recovered, and was briefed by a MRT staff about what happened.

"From what I gathered and remembered, the staff said that I was unconscious on the ground for 30 seconds, and suffered a neck strain, a swollen bruise on my lower left cheek, and a bump on the right side of my head," added Ziyang.

According to the Stomper, he filed a police report on Wednesday (Dec 28), and when the police contacted Hill View MRT Station, the staff reported the footage was not logged.

The police officer explained it was probably because no ambulance was called to the scene, and hence, the staff did not log the footage.

"I have called Hill View station to request for them to log the footage for police retrieval.

"They got back to me to assure that the footage will not be deleted, but are no longer allowed to provide me more information since I have filed a police report, according to instructions by upper management.

"Investigation officer initially responded to it as a non-offence case, because there was no malicious intention involved, but my brother gave an example of a young kid throwing a flower pot down a HDB flat, and the reporting officer said that was considered an offence.

"Investigation officer subsequently concluded it was a criminal offence. Identities of the boys will be withheld if they are minors."