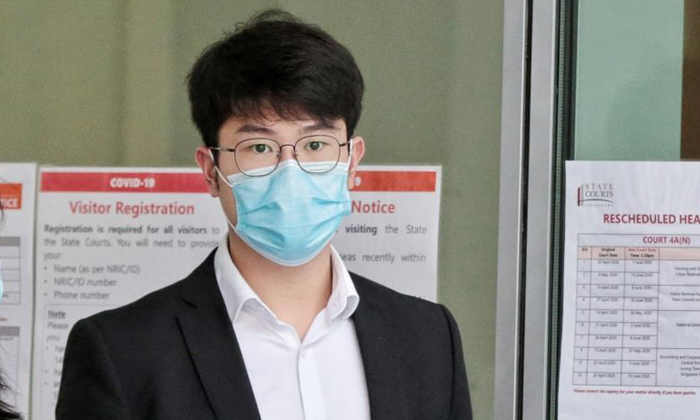 From a bak kut teh meal to that must-have breakfast fare, timing is everything when it comes to food cravings and measures introduced to stem the spread of the coronavirus.

Financial adviser Tay Chun Hsien, 22, felt the urge to have breakfast at a neighbourhood shopping mall even though he had only about 30 minutes to go to the end of his quarantine.

He left his Choa Chu Kang flat to have his meal, a trip that has proven costly.

On Wednesday (April 29), the Singaporean was fined $1,500 after pleading guilty to an offence under the Infectious Diseases Act.

Deputy Public Prosecutor Norman Yew said Tay had been suspected of being a contact of Covid-19, and the director of medical services then ordered him to be isolated in his flat.

Court documents did not state why he was suspected of being a contact  at the time.

The DPP added that the written order “stated in bold and underline” that he had to be isolated in his flat from March 19 until March 22 at “1200hrs”.

The Ministry of Health said in an earlier statement that Tay had acknowledged the contents of his quarantine order when he received it.

He had also noted that he was not supposed to leave his home for the entire duration of the quarantine period.

Despite this, he left his home at around 11.30am on March 22. It took him about seven minutes to walk 550m to a food court at Yew Tee Square in Choa Chu Kang Street 62, the court heard.

After that, he bought a meal and sat down at a table inside the eatery to consume it.

At around 11.40am, a Certis Cisco Security officer made a video call to Tay’s mobile phone to check if he was home.

Tay was then told to return home immediately after he informed the officer that he had left his flat to buy food.

The offender complied and he reached his home at around noon.

On Wednesday, DPP Yew urged the court to sentence Tay to a fine of $1,500, adding: “The risk of transmission in this case is low. He spent a relatively short time outside his place of residence and did not travel far.”

Defence lawyer Richard Siaw said that his client committed the offence after he mistakenly thought that the quarantine order ended at midnight on March 22 instead of noon that day.

Last week, Alan Tham Xiang Sheng, 34, was sentenced to six weeks' jail for breaching a stay-home notice (SHN) to have a bak kut teh meal after a trip back from Myanmar.

The Singaporean was the first person to be convicted of exposing others to the risk of infection by breaching a SHN.

Offenders convicted of leaving their homes without the director of medical services' permission can be jailed for up to six months and fined up to $10,000.