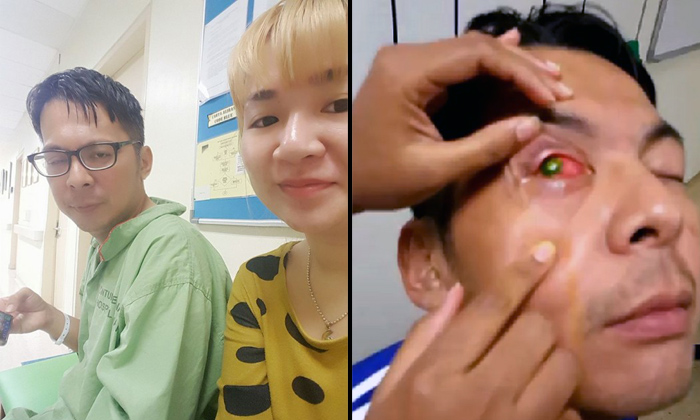 If you are not following all the advice to keep your contact lenses clean and not wear them for long hours, this guy's painful experience might finally motivate you to do so.

A Facebook user named Christina Wei shared how her husband spent the first three days of Chinese New Year in hospital after suffering a severe eye infection due to prolonged use of contact lenses.

Christina said her husband's eyeball  had started to swell after he slept with his contact lenses on, reports World Of Buzz.

A few days later, he further injured his eyeball while putting his contact lenses on.

“Following the swelling, we went to see a general practitioner and he (husband) was given a bottle of eye-drops.

"However, after applying the eye-drops, the infection got worse,” she added.

After that, they immediately sought help from an ophthalmologist but it was too late.

“The doctor told us that his (husband) eyeball was severely damaged due to the infection.

"The eye-drops given by the general practitioner contains steroid, which sped up the growth of bacteria on the eye.

"As a result, his right eye turned blind. If the situation gets worse, he will have to undergo surgery to replace his cornea,” Christina added.

Her husband has been discharged but he still can’t see due to the severe damage.

The doctor can only determine how badly his vision was affected and if he needs a cornea replacement after he has fully recovered.