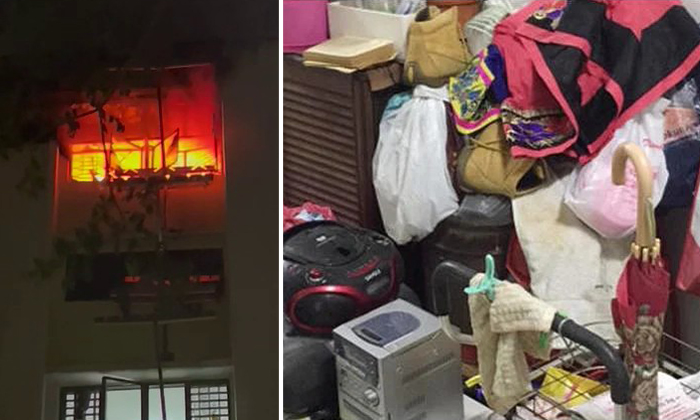 A 48-year-old man who died after a flat in Jurong East caught fire in the early hours of Tuesday morning (Aug 16) had lived there with his sister.

The Singapore Civil Defence Force (SCDF) was alerted to the blaze at the ninth-storey flat at Block 236 Jurong East Street 21 at around 2.50am, it was earlier reported. They had to penetrate the smoke-logged unit to conduct firefighting operations.

An occupant in the affected flat had self-evacuated before SCDF’s arrival, while three neighbours were evacuated from the adjacent unit after firefighters conducted forced entry.

The same flat caught fire again one day later at around 5am on Wednesday (Aug 17). It was likely reignited by deep-seated embers within the rubble.

Shin Min Daily News identified the deceased as Mr Huang Mingquan, who lived in the flat with his 50-year-old sister, Ms Huang Xiumei.

Their younger sister, 43, told the Chinese evening daily that Ms Huang is a newspaper vendor while Mr Huang was an odd-jobs worker who often took in old recyclable items and electrical appliances.

The younger Ms Huang said: "My sister sells newspapers for a living and doesn't even make $300 a month. We told her to stop selling, but she said that reading the paper can help readers to gain knowledge."

A fellow newspaper vendor acquainted with Ms Huang Xiumei said he has people bringing her newspapers to sell every day. Despite a daily income of $5 to $10, she continues to operate her stall without fail.

The younger Ms Huang also revealed that her brother would repair the electrical appliances he took in and sell them to neighbours for $2 to $3 or even give them away for free.

One of the three neighbours rescued from the blaze, a 56-year-old information technology analyst who wanted to be known only as Mr Sunil, claimed that the owners of the affected unit had a habit of leaving items, such as household appliances and bags, in the common corridor.

Mr Sunil told The Straits Times that he has raised the issue many times since 2012 with Jurong Town Council and the Housing Board, but it was never resolved.

An investigation to determine the cause of Tuesday’s fire has begun. There were no reported injuries from the second fire on Wednesday.