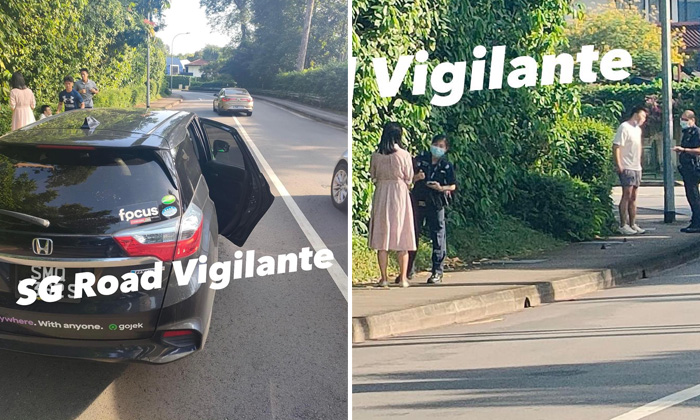 A man, who was travelling with a woman and child in a private hire vehicle, allegedly jumped out of the moving car along Cluny Road in Tanglin on Saturday (July 23).

According to the driver, who posted about the incident on the Professional PHV Drivers Facebook group, he picked up the couple and child from River Valley.

The driver said the couple were conversing in Mandarin before the man suddenly jumped out of the moving car along Cluny Road.

The driver stopped the vehicle to check if the passenger was alright, but the man allegedly tried running away, while bleeding from his elbow and knees.

The woman then chased after the man, as both of them kept shouting at each other, the driver said.

The Singapore Police Force confirmed that they received a call for assistance along Cluny Road at about 8.55am on Saturday, July 23.

A 28-year-old man was taken conscious to the hospital, apprehended under the Mental Health (Care and Treatment) Act, and referred to the Institute of Mental Health for psychiatric assessment, the police added.

The driver, identified by AsiaOne as Facebook user Botak Sidhu through his post, wrote: "Passenger jumped out of my moving car after fighting with his wife. What a spoiled day !!! Grrrrrr."

He also shared photos of the incident, with an ambulance and police at the scene. The post has since been deleted.

Despite the man’s dire actions, which suggest he could be going through mental health issues, the driver appeared rather single-minded in his gripe: "It's really selfish of him to jump out of the moving car in that manner," he told AsiaOne.

"With the shock, I could have lost control of the vehicle and a whole other accident could have happened."