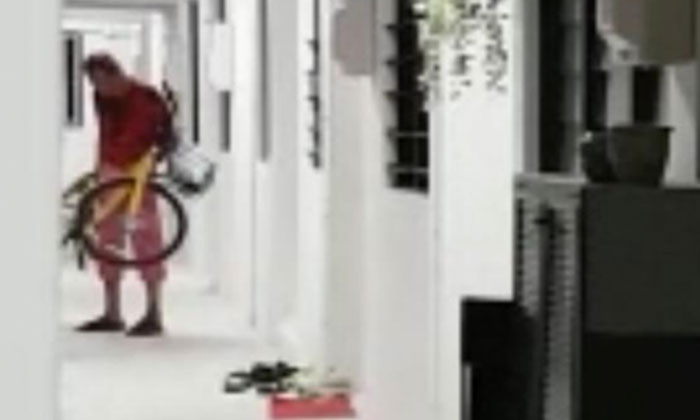 An odd-job worker was sentenced to six months’ jail for a string of offences including throwing a bicycle from the 15th floor in a Housing and Development Board (HDB) block and getting into a dispute with a neighbour, while being completely naked.

According to The Straits Times, Dhanaraj, a Singaporean, had pleaded guilty to committing a rash act and other charges, including theft and performing an obscene act in public.

He had stolen two bottles of wine from a FairPrice supermarket branch and openly rubbed his genitals at a Starbucks outlet in Bedok Point shopping centre.

The judge noted that many of Dhanaraj’s offences had been committed while he was drunk and he had a repeated history of doing so.

“It is quite clear that… drinking is the source of your problems.

“Your behaviour in public is an assault on people's senses.”

Deputy Public Prosecutor Zhuo Wenzhao said that the police were alerted by a resident on Feb 23 to someone throwing an ofo bicycle from the 15th storey of Block 556 Bedok North Street 3, where Dhanaraj resides.

Dhanaraj had been about to throw a second bike down when a resident from the 13th floor spotted him and asked him to stop, reports Shin Min Daily News.

The resident had apparently heard a loud bang and looked out of his windows to see a damaged bicycle on the ground floor.

Dhanaraj who was about to throw a second bicycle down only placed the second bicycle back on the corridor after the resident repeatedly asked him to stop.

He reportedly told the resident that someone was going to haphazardly place the bicycles on the corridor.

The resident subsequently called the police and Dhanaraj was arrested.

He had also been arrested the day before after a neighbour's complaint that the intoxicated Dhanaraj was arguing with her over ‘nothing’ while being completely naked.

The court heard that Dhanaraj had been seated in his living room with the door open and visible to the public.

Dhanaraj had been jailed for past offences which include insulting the modesty of a woman and heaping verbal abuse on a bus captain.

The incident involving the ofo bike is the latest in the string of offences committed by Dhanaraj.