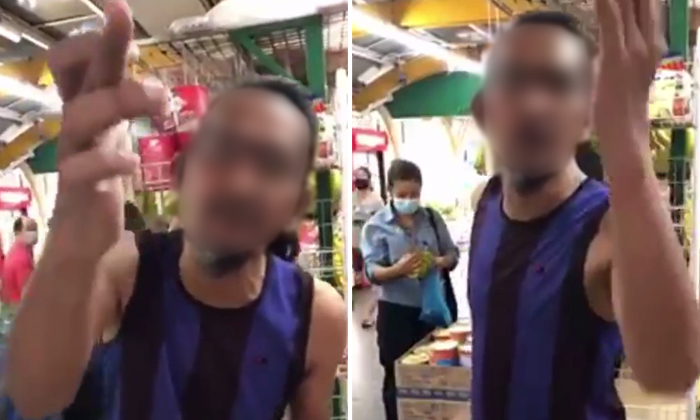 A 52-year-old man who made racist remarks and breached Covid-19 circuit breaker measures is being investigated by the police.

The incident took place at about 6pm on Friday (April 17), when the man visited a grocery store at Block 651 Jurong West Street 61 to buy a packet of soy milk, the police said on Saturday.

The store supervisor denied the man entry and declined to sell the item to him, as he was not wearing a mask.

The man took offence and hurled racist remarks and vulgarities at the supervisor. He also attributed the source of the Covid-19 outbreak to Chinese people.

On Saturday, the police received several reports on a video clip of the incident circulating online. Officers from the Bedok Police Division subsequently established his identity and traced him within three hours.

A person who makes remarks with a deliberate intent to wound the racial feelings of another can be jailed up to three years or fined, or both. The offence of causing intentional harassment carries a fine of up to $5,000, a jail term of up to six months, or both.

Those who fail to wear a mask when out can be fined $300 for the first offence, and $1,000 for the second offence. Egregious cases will face prosecution in court.

The police said it takes acts that can threaten Singapore's racial harmony "very seriously", adding that anyone who makes remarks that can breed ill-will and hostility between the different races "will be dealt with swiftly and firmly".

It also urged the public to take the circuit breaker measures seriously.