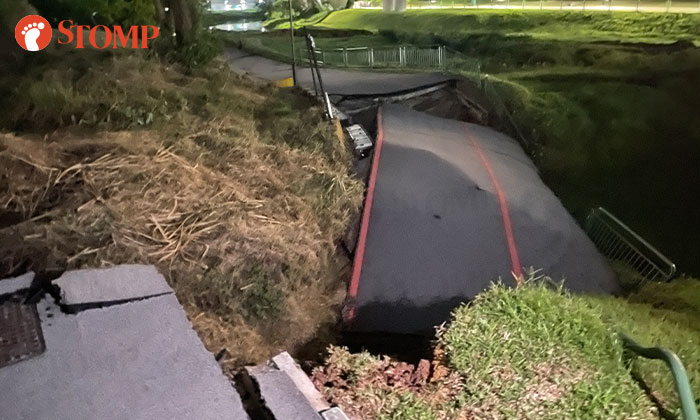 A passer-by suffered minor injuries after a landslide occurred near a Build-To-Order (BTO) construction site at Clementi Avenue 6 in the early hours of Friday morning (Sep 2).

Stomp was first alerted to the incident by Stomper Jonathan who came upon the landslide while cycling along the park connector at 1am.

"I managed to stop in time," he said.

"I stopped a jogger who came along later -- he couldn't see the hole clearly.

"I then rang 999 and decided to wait until someone came to put up a barrier."

Stomper Alvin shared photos taken before and after the landslide, showing soil that had slid into the canal. 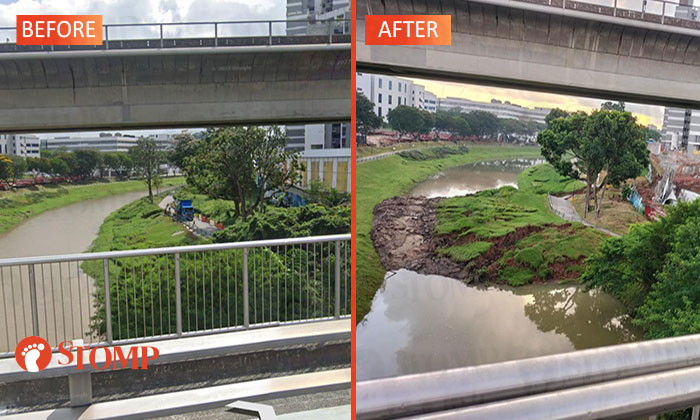 The Housing and Development Board (HDB) said in a statement on its Facebook page that the incident resulted in soil displacement into Sungei Ulu Pandan, causing damage to the Ulu Pandan park connector.

"A male passerby, who suffered some minor injuries and was attended to at site, is now resting at home," HDB said.

"Agencies are in touch with him to render any further assistance that may be necessary.

"There is no other reported injury."

A landslide occurred this morning, 2 September 2022, at a BTO construction site in Clementi. The incident resulted in...

Posted by Housing & Development Board on Thursday, September 1, 2022

HDB added that the affected areas of the park connector have been cordoned off for public safety and advised members of the public to stay away from the incident area.

It is working with NParks, national water agency PUB and Building and Construction Authority (BCA) to conduct a thorough investigation of the incident and carry out the necessary recovery actions.

"As part of our safety process and precautionary measures, we have checked the nearby completed, but yet to be occupied, blocks and confirmed that they remain structurally sound," HDB said.

MP for the area Sim Ann also posted photos of the landslide and advised residents to stay clear.

Landslide near Clementi Ave 6 (Clementi NorthArc construction site) in the early hours of the morning has caused damage...