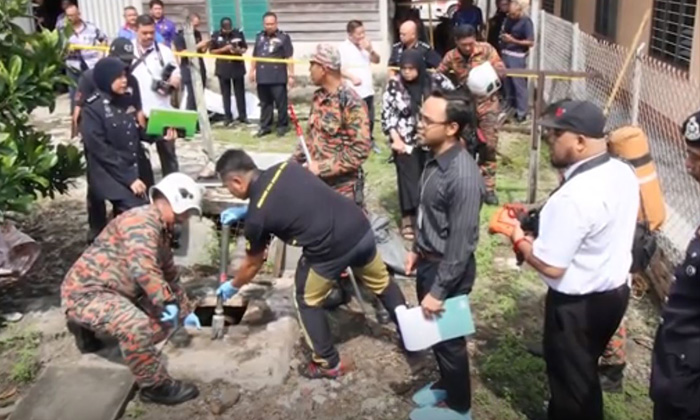 A 52-year-old man allegedly cut off the head of his disabled father and chopped his body into six parts in Ipoh, Malaysia on Oct 8 at about midnight after he was scolded by the victim for taking drugs in their home.

According to New Straits Times, the remains of 74-year-old You Su Kim were found inside a 1.5 metre deep septic tank at the back of his home and a dug up hole about 12 metres away from the tank in Kanthan New Village, Chemor on Tuesday (Oct 9) at about 9am.

His hands, legs and head were found in the hole, reported The Malay Mail.

The discovery was made by the victim's daughter after she noticed blood on the walls, pillows and mattress in You's house.

"As soon as I entered my father's room, I saw blood on the mattress and pillow," she said.

"Curious, I engaged the help of a neighbour to help look for my father.

"We then found signs of a freshly dug hole behind the house.

"My father is old and paralysed, my brother (suspect) was tasked with looking after my father over the past few years, it is just the two of them in this house.

His son was subsequently arrested at about 1.30pm.

"After he was arrested, the suspect led police to a long machete measuring about 0.6 metres, believed to have been used to chop up the victim.

“The blood-stained weapon was discovered in a room in their house.”

Police believe that the suspect was under the influence of drugs when he allegedly murdered his father.