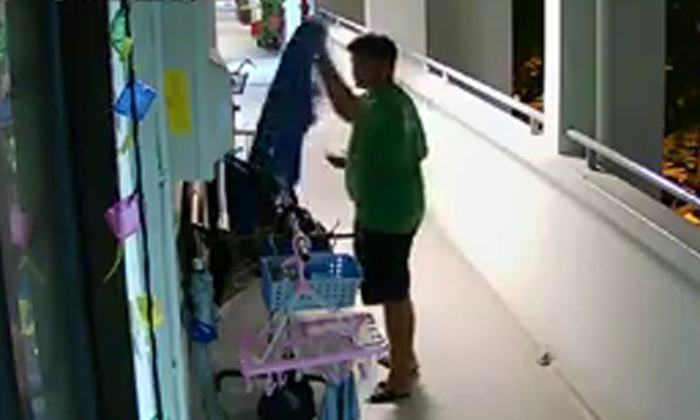 Grab is investigating an incident where a man in a GrabFood shirt was caught on camera taking an item from a resident's clothes rack along the corridor.

Facebook user Muhd Ismail posted a CCTV footage of the incident, which according to its time-stamp, occurred at around 1.28am on Tuesday (July 2).

In the video, a man in a GrabFood shirt can be seen walking along the corridor and stopping in front of a clothes rack.

He then looks around while removing a peg from a blue item hanging on the rack.

The man subsequently looks at his mobile phone, before removing the blue item from the rack and walking away with it.

It is unclear what item exactly he took, but a caption accompanying the video said "#grabtowel".

In response to queries by Stomp, a Grab spokesman said: "We are aware of this and are investigating the matter.

"Grab does not condone such behaviour and will ban delivery-partners who are found guilty."

On June 20, a 27-year-old Grab deliveryman was caught on camera stealing a pair of shoes from a resident at Keat Hong Close.

He was arrested on June 28 and Grab said it was working closely with authorities on the matter.