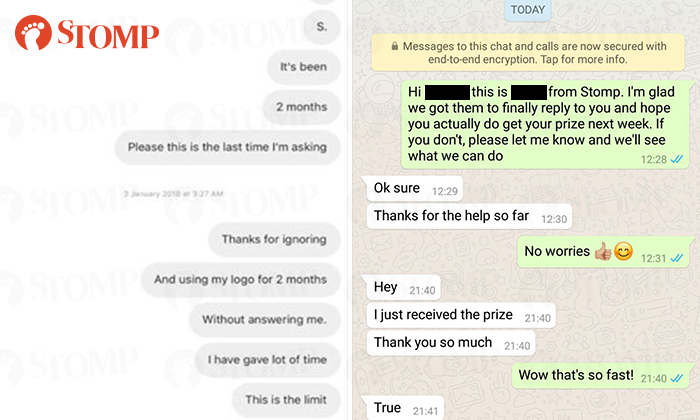 Things were not looking up for Stomper Low, as it had been two months and he still had not received a PlayStation 4 that he was promised for winning a logo design contest.

However, when the contest organiser was contacted by Stomp yesterday (Jan 24), Low subsequently received the PlayStation on the same day.

The contest was organised by NotSoGoodGamers, a Singaporean gaming channel with over 127,000 subscribers on YouTube. The channel is also owned by popular YouTuber JianHao Tan.

Low had initially sent in his logo in September 2017. He was informed via Instagram that he had won the contest on Nov 7.

He was initially in shock, saying "Omg" and "I can't believe it" in response to the announcement via an Instagram DM.

The channel then requested him to make a few tweaks to the logo and after he did, the channel's logo was updated to the new one that the Stomper had designed.

The channel then updated all its social media accounts with the new logo that the Stomper had designed on Nov 11, 2017.

NotSoGoodGamers also posted an announcement on their Instagram page on the same day, informing their fans that the Stomper had won the logo contest and would be getting a PlayStation 4 FIFA bundle. 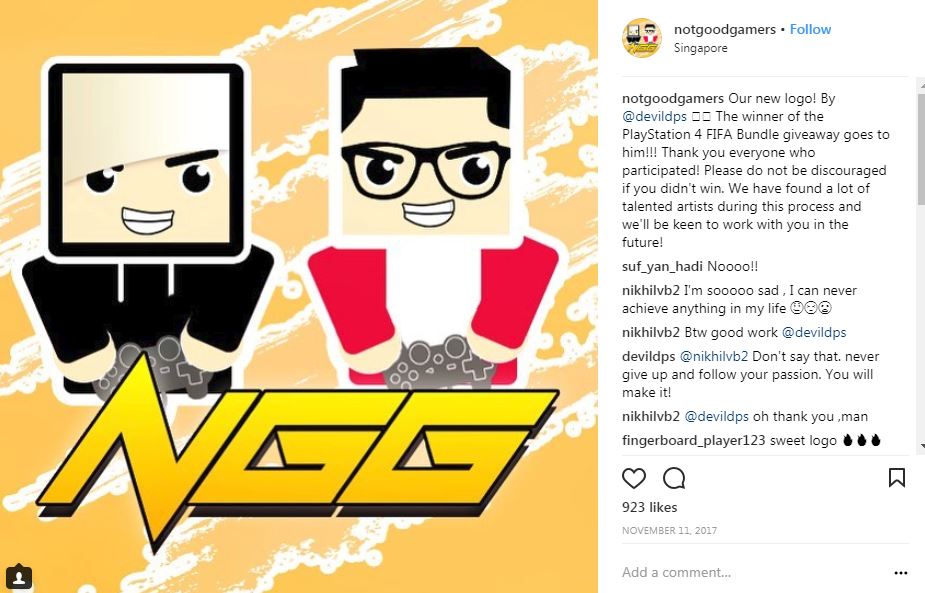 He was also informed that the giveaway would be handed to him personally.

The Stomper then asked if he could bring a friend, saying that he was also a fan.

However, the message and a few others that he sent after that were met with radio silence until two weeks later on Nov 22, when the channel replied, "Sure :)"

Low then tried to discuss when to meet up for the giveaway but was ignored until Nov 30, where the channel responded that they would be getting in touch with him on how he could claim the prize.

Two months passed and despite repeated attempts at reaching out to the channel, none of his messages were replied to.

Things were looking bleak until his friend, Foo, alerted Stomp to what had happened.

A representative from his team then responded to Stomp in less than three minutes after we sent out the email.

The representative told Stomp, "We got held up with the contest we are actually giving it away next week. Thanks for checking in with me."

At 9.40pm, Low told Stomp over WhatsApp that he had met up up with JianHao Tan's team to collect the PlayStation.

In a telephone interview with Stomp, Low said:

"If you guys hadn't contacted them, I don't think I would have ever received the prize."

Low added that he felt that it was "quite unfair" considering that the channel only reached out after Stomp's query as he feels that the channel is only doing it because they do not want to get into trouble with the public.

Related Stories
Guy goes psycho on multiple women who rejected him -- even after only 1 date
'Ah Long' transfers $600 to woman and asks for $800 back -- but what happens next is like a TV drama
Mover sends photo of influencer Andrea Chong and says 'no bra inside' -- to Andrea Chong
More About:
contest
giveaway
message
text