Man hurls vulgarities at MRT staff, challenges them to call police: 'Why must I go out? I pay money leh' 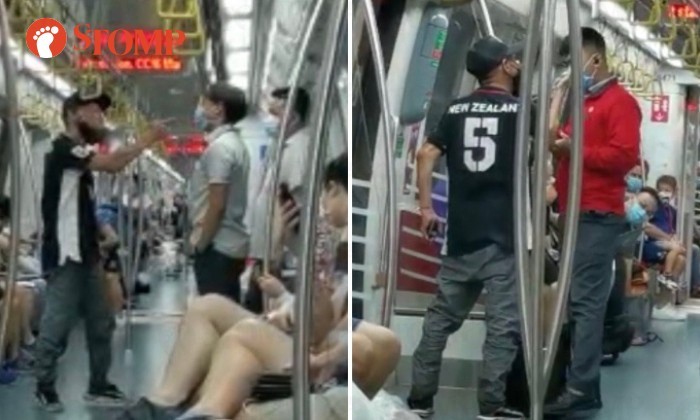 A man was caught on video causing a scene on an MRT train on the Circle Line and shouting profanities at two staff members on Sunday (Aug 23).

A Stomper witnessed the incident that occurred on the Circle Line at around 3.30pm and shared videos of what happened.

"I entered the train with the drunk man at Holland Village MRT station," the Stomper said.

"I could tell that he was drunk because I saw him drinking earlier. He was even carrying a few bottles of alcohol.

"When a staff member approached him, he started shouting vulgarities and even took off his mask."

As seen in the video, the man was first confronted by a staff member in red, who appeared to be asking the man to put his mask on properly.

When the staff member used his walkie-talkie, the man raised his voice and said: "Huh, a lot of handphones ah? I don't care."

The man then continued cursing and swearing at the staff member.

When the train stopped at Farrer Road MRT station, two more staff members can be seen entering the train to try to resolve the issue.

The staff member in a grey shirt then asked the man to leave the train, to which he said: "Why must I go out? I pay money leh.

The man then continued to yell profanities at the staff members. 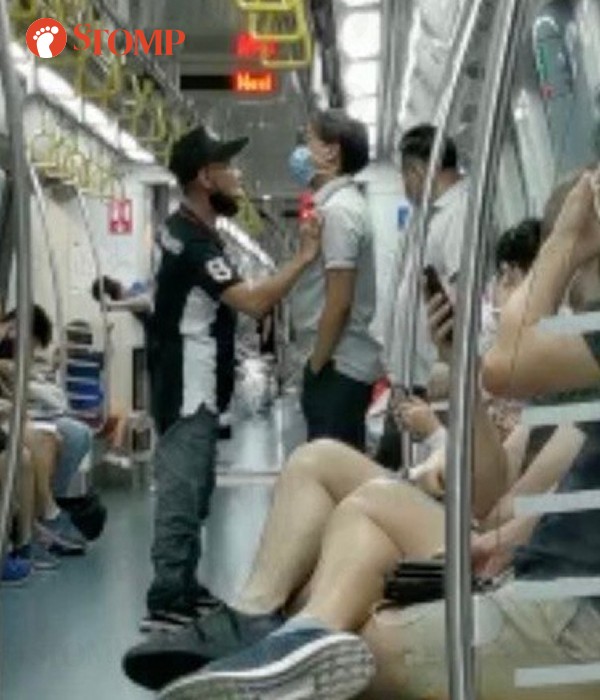 At one point, the man can even be seen putting his hand on the chest of one of the staff members while gesturing aggressively.

"You come so many people, you think I scared ah? I never scared one," the man shouted in the video.

The Stomper added: "I am not too sure what happened next, but the man finally exited the train at Bishan MRT station."

"On 23 August, a commuter travelling in a Circle Line train heading in the direction of Bishan was spotted not wearing his mask properly.

"An SMRT staff onboard the train then approached him and advised the commuter to wear his mask properly.

"But the commuter verbally abused the staff and continued the abusive behaviour while travelling in the network.

"Transcom was activated and police subsequently arrested him.

"We do not condone any kind of abusive behaviour towards our staff as they do their best to provide a safe public transport environment for all commuters."

A spokesman for the Land Transport Authority (LTA) also provided a statement about this incident and said: "As frontline workers who provide an essential service, our public transport workers follow Singapore’s safe management regulations and laws strictly to protect themselves and other commuters.

"These measures include mandatory mask-wearing on buses and trains. Commuters who do not comply can be denied entry.

"Generally, most commuters comply after being reminded to wear their masks correctly, but there have been a few who refused to cooperate and resorted to verbal and physical harassment.

"Since April this year, there have been around 80 cases of disputes involving commuters who did not mask up on public transport. About 40 have been fined for not doing so.

"We do not condone such behaviour towards our public transport workers and offenders will be dealt with according to the law."