Man allegedly hurls plates at diner after insisting he has 'choped' table, police looking into matter 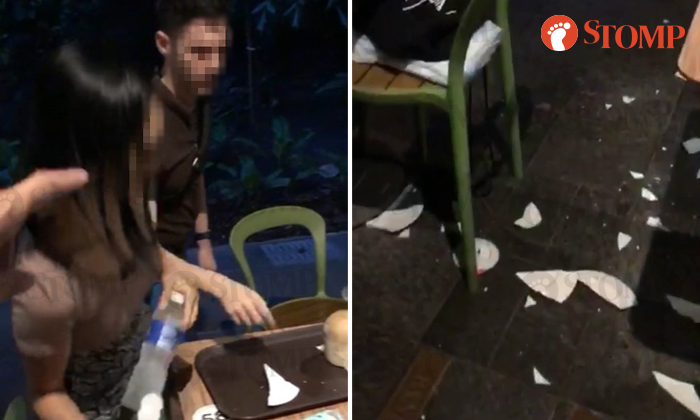 Upset that the restaurant table he had 'reserved' with a tissue packet was already occupied even before he arrived, a man allegedly flipped out and threw a stack of plates at another diner.

The incident occurred at Casa Verde, a family-friendly trattoria located within the Singapore Botanic Gardens, on March 3.

Stomper Anonymous said her brother, his wife, a female friend, and three children had visited the restaurant for dinner that evening.

Anonymous, who was not at the scene, told Stomp: "After the adults sat the three kids down, they went to order food at the counter.

"A couple then came and sat down at the table where the three kids were seated. The children did not realise that the couple had placed a packet of tissue paper on the table.

"The adults then came back with a stack of porcelain plates so that they could split a pizza.

"However, the couple said they had already 'choped' the table because their tissue packet was there.

"My brother, who is the quiet and easy-going type, asked how could that be as the table was occupied even before the couple arrived. He asked them if they had asked his kids.

"My brother refused as his family had occupied the table even before the couple 'choped' it.

"In his rage, the man grabbed the stack of plates and hurled them across the table, at my brother."

According to Anonymous, the man's female companion had tried to stop him but was "too late".

The Stomper added: "The plates were smashed everywhere, even around children. Not just my brother's children but other kids who were at the restaurant too. They were all very frightened.

"Members of the public yelled at the man to stop and someone called the police.

"The man wanted to attack my brother again but was restrained by other witnesses. Someone started filming and my brother called the police.

"The police arrived around 20 minutes later but the couple had already left."

In a video that Anonymous shared with Stomp, broken shards can be seen strewn on the table and ground. The man is also heard repeatedly saying that he had already 'choped' the table.

Their dinner ruined, the family departed the restaurant.

Anonymous said her brother suffered cuts on his arms in the incident and visited Ang Mo Kio Polyclinic on the same night.

She added: "I asked my brother why he did not stop the couple from leaving and he said he did not want the matter to escalate into a fight that would land both parties into trouble.

"This is literally hit and run. The man could have used the porcelain shards to hurt my brother.

"I am looking for the couple so that they can be identified and I can pursue legal action."