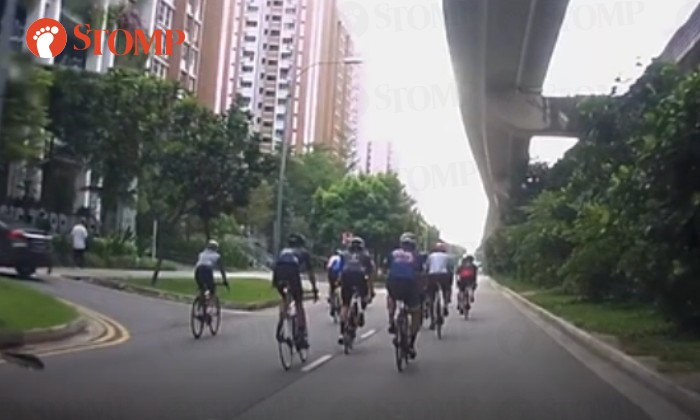 A man was driving along Punggol Drive and was taken aback to see a group of more than 20 cyclists hogging the road.

The incident, which happened on Saturday (Nov 21) at 7.30am, was caught on Stomper Anonymous' in-car camera.

"I was happily driving until I saw a big group of cyclists taking up the entire lane," the Stomper said.

"This is not the first time I've encountered something like this. I often see groups of cyclists on the road, especially on the weekends.

"It was frustrating to see them blatantly ignore safe distancing rules that were put in place due to Covid-19.

"I also believe that cyclists are supposed to keep to the left side of the left lane, and not take up the entire lane. It's worrying because this could result in an accident and they could get injured."

According to a Facebook post by the Singapore Cycling Federation, cyclists should only cycle in groups of five.

The Singapore Cycling Federation added that groups of cyclists should also stay at least 3m away from each other.