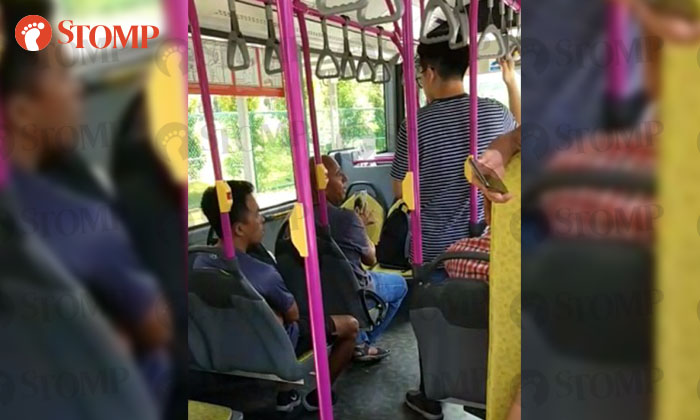 A passenger was seen ranting at a driver on bus service 156 on Jan 12, at about 10am -- because the bus was moving too slowly.

A Stomper captured a video of the incident while he was aboard the bus, headed towards Junction 8.

The passenger can be seen pointing his phone towards the bus driver.

The bus driver is heard asking another commuter, who is in a striped t-shirt, to help explain the passenger's point.

A boy in the blue bag can also be heard saying: "Oh because cannot be earlier by two minutes. So that's why he needs to delay a bit."

According to the Stomper, the bus had apparently arrived at the bus stop two minutes earlier than scheduled. Therefore, the driver was trying to go slower so as to fall back in sync with his schedule.

While the man in stripes and the bus driver tried to explain the situation, the passenger held up his phone again and seemed to be recording the situation.

A man can be heard in the background saying: "Buses run on a tight schedule. They can't be faster, they can't be slower."

However, the angry passenger exclaimed: "Can you hurry up and drive or not. How much of time do you want to waste?"

The man in stripes then tried to step in to explain the driver's point, but the passenger retorted.

He said: "Yes but it is rubbish. You know he's driving at 20 kilometres per hour.

"Whatever reason he has, his place is still Sengkang. So far away."

At this point, the bus driver returned to his seat and started to drive. The bus roared as it moved forward.

The passenger can be heard telling the commuter in stripes how it was unfair to do such a thing.

The latter is heard saying: "They are working as well. They're not purposely doing this, driving slowly or whatever."

Related Stories
Premium Bus driver given warning after shouting at SBS Transit driver for honking at him 3 times
Another debt collection company shows up at kway chap lady's stall seeking $200k, but here's her response
Man challenges cyclist in viral dispute with lorry driver to cycling match: 'I better and faster than you'
More About:
bus driver
Bus
dispute
argument