Man gets stomped on and punched during brawl at Yishun playground 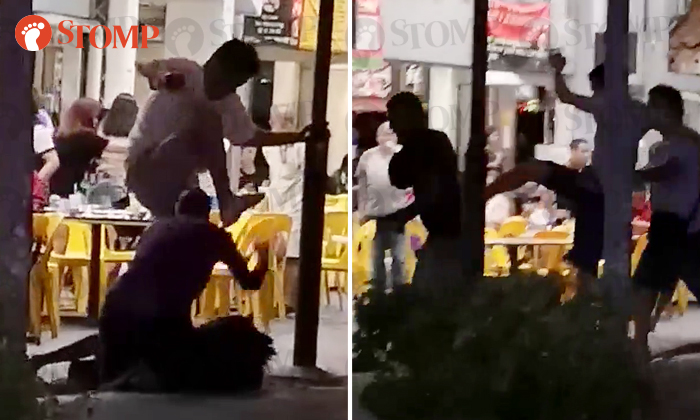 A brawl involving several men broke out at a playground near Block 418 Yishun Avenue 11 on Tuesday night (Feb 26).

Stomper Goh witnessed the violent dispute at around 11pm and filmed a video that he sent to Stomp.

He said the fight occurred outside the 418 Coffee Station kopitiam and "started all of a sudden".

Goh told Stomp: "It began with a group of four to five men, before another two uncles joined in.

"I saw that the fight was four uncles versus two other guys, though I'm not sure why they were fighting. I think some of them had been drinking.

"There were a lot of kids playing at the playground at that time. A small boy sitting near me got frightened by the scene and cried, which you can hear in the video."

In the video, a man can be seen raining punches on another guy, who is lying on the ground.

At the same time, a third man, clad in a white shirt, repeatedly kicks and stomps on the guy who is on the ground.

Shortly after, another man can be seen delivering a kick to someone else's back.

The Stomper added: "The fight lasted for around one minute and my friend called the police."

Stomp understands that when police arrived at the scene, the fight had already broken up.