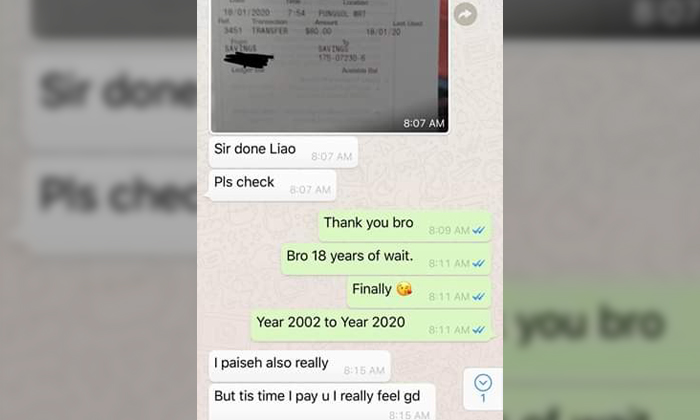 Many of us would be familiar with the feeling of lending money to someone in need — only to never see our cash, and sometimes even the borrower, ever again.

Facebook user Derick Khoo Yew Seng thought that was the case for him too after lending $80 to an acquaintance in 2002.

However, he was pleasantly surprised when he received the amount back in full — after 18 years.

In a Facebook post on Saturday (Jan 18), Khoo recounted how he loaned $80 to an "army man under my care" during National Service (NS) "without consideration", hoping that the money would tide the man through.

However, the man did not return the money after NS. He also changed his phone number, causing the pair to lose touch.

Khoo eventually ran into the man again and they exchanged their contact. The matter of the loan was also mentioned.

"He said he did not forget and sure would return to me. I believe him!" wrote Khoo in his post.

Unfortunately, the man failed to fulfil further promises and deadlines about repaying the money, before changing his number again.

But thanks to social media, the two men managed to connect once again.

The caller, who asked for Khoo's bank account number, identified himself and 'confirmed' that he would return the money.

Khoo said: "I believed it half heartedly as I have long ago let this debt flow... This morning, he texted me with this receipt. Tears flowed down from my eyes."

Khoo emphasised that it was not about the money. Rather, he was thrilled that the man "finally did it and stepped out of that 'always empty promises' zone.

"I see that my man finally wanted a change of his life!" added Khoo, who also clarified that the intention of his post was not to shame the man.

"I sincerely hope you read this post and you must try your best as a responsible man to take care of your family and work hard for your life."

To those who are still owed money, maybe Derrick's experience will give you some hope.