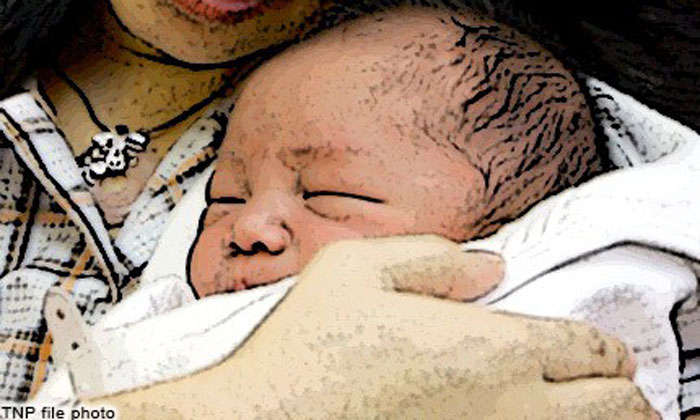 A wanted man who was carrying his two-month-old daughter tossed the baby at a police officer when he tried to evade capture.

The policeman caught the child and handed her to his colleague before running after the offender.

The baby was not injured and her father was arrested soon after.

The 40-year-old Singaporean man, who cannot be named to protect his daughter's identity, was sentenced to 17 months' jail on Monday (July 26).

He had pleaded guilty to offences including one count each of ill-treating a child and assaulting a woman with whom he had an "intimate relationship".

The man, who has a history of drug abuse, had failed to present himself at the Jurong Police Divisional Headquarters on July 22, 2019, for a urine test.

He was marked as a wanted man after that and a police gazette was then issued about his case.

At around 4pm on Jan 18 last year, he went to Hong Kah North Neighbourhood Police Post with his wife and two children to make a traffic accident report linked to his company van.

Deputy Public Prosecutor Phoebe Tan that the system produced a result that showed the man was "wanted" for failing to report for a urine test under the Central Narcotics Bureau.

A police gazette had also been issued against him. Sgt Tan then discreetly lodged a report, requesting for backup officers to be sent to the police post.

The DPP said: "Sgt Tan tried to act as if there was nothing out of the ordinary and continued lodging the accident report.

"The accused sensed that something was amiss, as he had noticed Sgt Tan using his phone and observed the officer's body language. He suspected that the police realised that he was 'wanted' and formed the intention to run away."

The man's wife later told Sgt Tan that she needed to use the toilet.

She handed the two-month-old baby to her husband as another police officer escorted her to a restroom.

The man suddenly stood up while carrying his daughter and said she "needed some fresh air".

The policemen, however, did not use any force to try to stop him as they were concerned for the baby's safety.

Instead, they continued following the man and told him to stop walking.

At around 4.20pm, he swung his daughter with one hand towards Sgt Tan and tossed her at the officer. Sgt Tan caught the baby and the man was nabbed after a chase.

The man was out on bail when he assaulted a woman with whom he had an intimate relationship.

He committed the offence in January this year after consuming some liquor.

For ill-treating a child, an offender can be jailed for up to four years and fined up to $4,000.

Related Stories
Maid threw toddler on sofa for 'messing up the house', caused her to hit her head on armrest
Maid who elbowed baby's face and stepped on his knee gets 9 months' jail
Man accused of killing 4-year-old stepdaughter after she urinated outside toilet bowl
More About:
baby
chase
police
court
jail
drugs
assault
child abuse