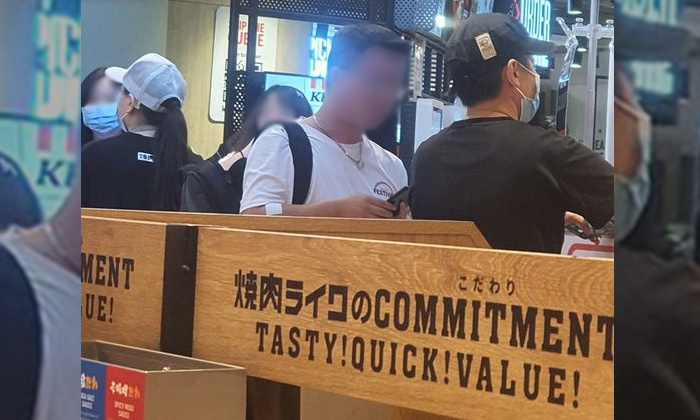 A man has been called out by a fellow diner for his allegedly rude, inconsiderate and self-entitled behaviour at a restaurant in Paya Lebar on Thursday evening (Sep 3).

The post uploaded on the day of the incident by Facebook user Allan Tang has been shared over 2,300 times and garnered almost 300 comments.

Mr Tang, who shared a picture of the man at Yakiniku Like at Paya Lebar Quarter shopping mall, alleged that the man had been dining alone at a two-seater table and "continued sitting there after finishing his meal, way past the 40-minute time limit given to each diner".

Mr Tang said the seating arrangement was not a problem as there was not much of a crowd at the time of the incident, but took issue with how the man was "depriving other diners on queue outside the restaurant the chance to enter and enjoy their meal" by staying past the time limit.

When a staff member told the man that the 40-minute time limit was up, he "had the audacity to raise his voice at the staff and claimed no one told him there was a time limit," said Mr Tang.

"The next staff took over, [but] he carried on his shouting and ranting at her," he added.

Mr Tang, who was seated near the man, decided to intervene and told the man that there was a sign outside the restaurant informing customers of the 40-minute dining time.

Mr Tang added: "He carried on shouting, 'Nobody told me about the 40 minute time limit!' to which I shouted back, 'BULLSHIT!'"

When contacted by Stomp, Mr Tang explained that he decided to tell the man off as "what he did was enough to spoil my dining mood".

According to Mr Tang, the man then left the restaurant without paying. When staff asked to return and make payment, the man allegedly shouted back, 'I thought is pay online!?'

The man also "whipped out his mobile phone" to take a photo of restaurant staff after making payment, said Mr Tang.

Mr Tang, who commended the restaurant staff for how they handled the situation, added in his post: "You guys really stood your ground and I respect all of you for that."

He also slammed the man for his "self-entitled behaviour," adding: "And this why I stand by my decades long belief that 'Customers Are Not Always Right'.

Many netizens praised Mr Tang for standing up for the restaurant staff and "doing the right thing" instead of turning a blind eye.

One user commented: "It is such a blessing to see someone like you exist! I am now a proud waiter to be serving people like you."

Another wrote: "Thanks for standing up for the staff. Too often people just watch on and don't do anything about extremely unreasonable customers. I think we all have got a part to play to make these establishments safe for everyone, staff included."

However, one netizen questioned the intent of Mr Tang's post and said: "This situation is over and solved, but the purpose to take a photo of him? To make him famous?"

He said: "Feeling a deep sense of justice, I wanted to deter the man from having any thoughts of trying to fabricate his 'bad' dining experience there on social media or to the management of Yakiniku Like in the form of a lengthy e-mail, when he was the one spoiling the dining experience of fellow diners there with his behaviour.

"As far as I'm concerned, I've done exactly what needs to be done. This case is over and I would like to move on from here.

"I was just merely helping protect the staff there with a factual account of what really happened that day, as well as to clear them of any wrongdoings. I guess it really worked with the thousands of shares on Facebook."