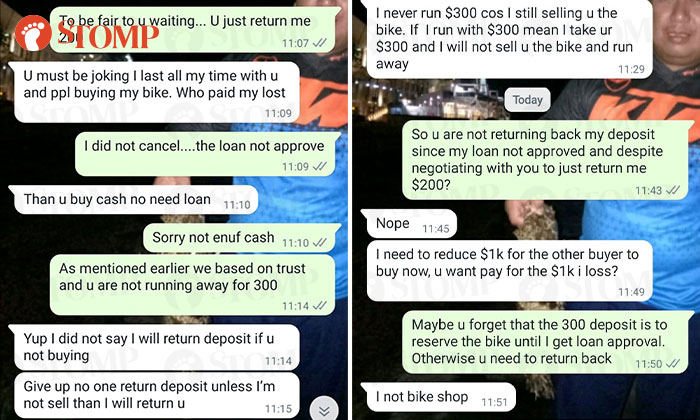 A man was blocked by a Carousell seller who refused to return him his $300 deposit he had paid for a motorcycle.

Stomper Faz shared with Stomp that he wanted to share his experience to warn others and prevent them from going through the same ordeal.

On Aug 11, Faz was scrolling through the online marketplace in search of a motorcycle.

He found his 'dream motorcycle, a Honda ST1300, and texted the seller @harleysoftail to ask for more information.

"At the beginning of the conversation, everything was going fine and we even decided to exchange our telephone numbers to chat more via WhatsApp.

"During the negotiation phase, he agreed to sell the motorcycle to me at $8,500.

"However, I told him I would need to apply for a loan and he requested I put a reservation deposit of $500 so that he will not sell the motorcycle to another buyer.

"I negotiated with him to put a deposit of $300 instead and he agreed.

"I even emphasised that he should return the deposit back if my loan gets rejected.

Unfortunately for Faz, three days after applying for a motorcycle loan, his loan was rejected due to his bad credit report.

"I then informed the seller that I could not get the loan thus I could not buy the motorcycle from him.

"He was not happy with the news and he persisted that I get a loan from another financial institution which I did, but got rejected again.

"When I requested for him to return my deposit, he was not happy.

"He said that he had the right to take my deposit as I wasted his time applying for loans when he could have just sold the motorcycle to another buyer.

"Even when I negotiated with him to return me $200 for his time lost, he did not agree.

"He even told me that he is not a bike shop so he would not return the money to me."

The seller has since blocked Faz who has made a police report regarding the matter.

"My concern is $300 may not be big amount but one should always keeps their word and that amount was not easy for me to earn."

"I truly hope that I will be able to get back my deposit."