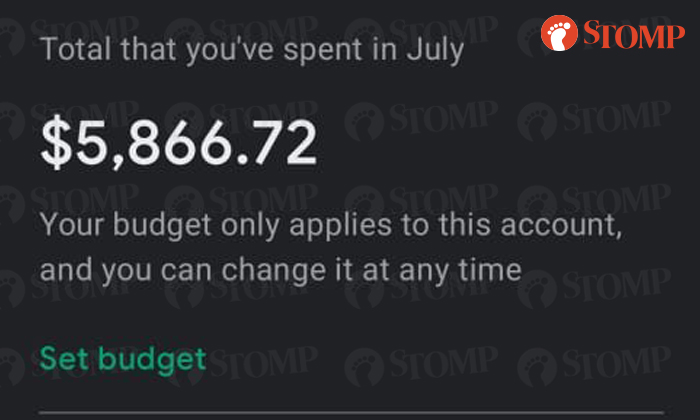 A man got the shock of his life when he received a bill of almost $6,000 for in-app game purchases made by his six-year-old son in just two days.

Stomper Jason said the charges were made by his Primary 1 son, who had used his tablet for home-based learning, between July 2 and July 4.

The charges were for a variety of games.

Jason told Stomp: "As the date for school reopening has been postponed and my son has home-based learning, I passed him my Android tablet to conduct some of his homework.

"After two days of him using the tablet, I experienced the shock of my life when I realised that he had made more than $5,000 worth of in-game purchases through my tablet without my knowledge.

As the charges were deducted immediately, the bill has already been paid in full.

Jason said: "I had no choice but to pay.

"I contacted Google and tried to seek help. To my deepest disappointment, Google refused to investigate further. Neither did they provide the requested refund, even though I made the refund request within 48 hours."

According to Jason, he hit a similar brick wall with the game developers and was unable to get a refund from them.

By sharing his story, the Stomper hopes to raise awareness and caution parents from falling into a similar plight.

He added: "I hope to highlight the important need for parents to be careful and pay special attention to how their children are using their mobile devices and computers, especially during recent times when home-based learning is becoming the norm due to Covid-19.

"The economy is really bad now and many are experiencing financial problems. Such issues only create more pressure on family finances.

"Parents, especially those who are not very IT-savvy, should also take steps like setting a budget on their Google Play Store account or a password for in-game purchases."

Jason said he has since learnt his lesson and taken precautions such as putting a budget limit on his account.

He also noted the lack of recourse when encountering such situations and appealed for greater assistance to be given to parents who find themselves in similar predicaments.

He said: "I believe that Google should take the necessary steps to assist their customers, given that those in-game purchases were unauthorised and made without my consent.

"I would also like to plead with the relevant authorities to look into such issues and implement regulations or assistance, as such incidents are heavy financial burdens on households.

"This will help parents to avoid suffering such heavy financial losses, especially during the current economic downturn."